Ranged combat includes both physical and magical types of attacks that is used at enough range to hit it's target without entering into melee range with it. A ranged attack or spell can also have an Area of Effect. 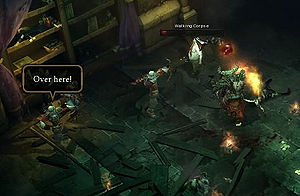 In Diablo 3, the following classes are considered "ranged" classes:

While the majority of Diablo 3 monsters use melee combat, there are plenty of ranged ones as well. In many cases they work together with melee and caster type monsters (or they are ranged/caster type themselves), to make the encounter more interesting for the player. A Skeletal Archer is usually situated behind Skeletal Shieldmen, forcing the player to either kill or circumvent the Shieldmen in order to stop the ranged attacks. Here are a few examples of melee monsters, with different mechanics: