Grenades is a Primary Demon Hunter skill unlocked at Level 15. When using this skill the Demon Hunter tosses out three small metal objects that delay for an instant, then explode in place. Grenades can be cast very quickly, and the potential Hatred generated by this ability is as high or higher than any of the other bow skills.

Targeting the Grandes is quite easy, the Grenades seem almost flexible, like Nerf toys the way they bounce a bit, but quickly come to a stop and explode where they are aimed. This was not always the case; during development the Grenades were like chunks of bouncy ice and they tended to skitter very quickly, even flying well off the visible screen. Hitting targets at close range was difficult. It is not any longer. 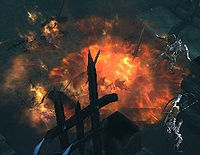 The skill releases a set number of grenades (dependent upon skill rank and possibly runes) into the targeted area. The grenades are physics-enabled, so they are able to bounce around objects like barrels or off of platforms such as walls and doors. After a one second delay, they explode in quick succession, doing splash fire damage to any objects or enemies close by.

See the Grenades rune effects page for a more thorough description of rune effects, or any of the individual rune pages for numbers, screenshots, blue quotes, and much more.

Grenades are meant to be spammed and used against small or large groups of enemies. They are not hugely damaging, but they can be issued forth in great quantities, and as they explode shortly after hitting the ground, it's easy to "lead" enemies towards you, steadily throwing the Grenades right at the moving target. The various skill effects change the style of the grenades and their damage type, but the targeting and function remain consistent throughout the different versions of the skill.

A fan complained about the difficulty in aiming Grenades and earned a rebuttal from Bashiok in December 2010[1].

I think it’s fine. It’s fun and you can pull off some pretty fun trick-moves. Not super practical all the time but I think it will definitely have its strategy. Plus, you can throw a rune on it and change the behavior if you’re having trouble gauging the throw distance.

Any sort of "trick shot" requirement to aiming has long since been removed from the game and aiming with Grenades is very easy in the final release.

A video of Grenades can be seen below, courtesy of the Diablo.IncGamers.com You Tube channel. This shows the earliest development implementation of the skill, back when they were much more "skittery" on the ground and difficult to aim.

The following Demon Hunter passives provide a benefit to Grenades, runed or not: 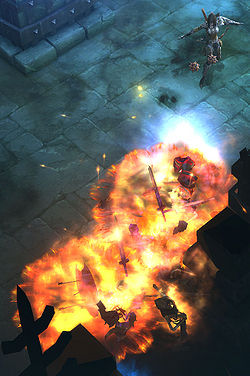 Grenades was first shown at BlizzCon 2010 as one of the originals when the Demon Hunter was unveiled. Wyatt Cheng spoke about the early form of the skill on the Gameplay Panel:[1]

Also selling the idea of ranged attacks is Grenades. I love this skill in our game because we have a 3D engine so you can actually bounce grenades off the walls and floors. I think it'll be an awesome way for players to come up with some creative uses for grenades, throwing them around corners. It actually bounces around and it shows, again, and it sells the Demon Hunter's themes - ranged attacks, gadgetry, preparation and planning. This is premeditated demon killing going on.

Flux reported about his time using the skill in the BlizzCon demo:[2]

Grenades was best used against mobs, since you could throw them very quickly, scattering 9 or 12 of the grenades across the mid-range of the screen, dealing good AoE to everything in the vicinity. They could be thrown quite a distance also, well off the screen, though aiming that way was just about pure luck. It would have been awesome in the arena, though. The second level of the dungeon in the demo featured numerous jail cells, which often had half a dozen skeletons and skeletal shieldmen in them. They were lots of fun with Grenades, since the bombs would bounce off the walls and stay where you wanted them to, then detonate with great effect.

Grenades can be seen in action on video here: