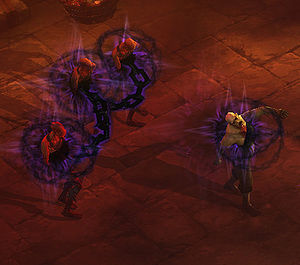 Entangling Shot is a Primary Demon Hunter skill unlocked at Level 3. It is a spear-like projectile that binds the target, and nearby targets, in chains which slow their speed.

The skill releases a spear-like projectile that encumbers the target with ethereal chains and also does a percentage of weapon damage. If the target is close to other enemies, they will also be linked into the chain and slowed.

The following is a very quick summary. See the Entangling Shot rune effects page for a more thorough description of rune effects, or any of the individual rune pages for numbers, screenshots, blue quotes, and much more.

A shot at already Entangled enemies.

Entangling Shot largely works as a debuff; the target is greatly slowed by chains that hinder movement. Any monsters near the target are caught in the chains and slowed as well. This skill also does a small amount of damage to the target; however, the damage is small enough that the skill's main utility is for crowd control.

A video of Entangling Shot can be seen below, courtesy of the Diablo.IncGamers.com You Tube channel.

The following Demon Hunter passives provide a benefit to Entangling Shot, runed or not: 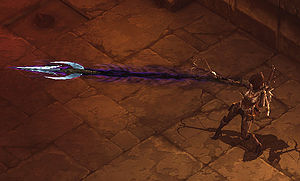 Entangling Shot was first shown at BlizzCon 2010 when the Demon Hunter debuted. Flux reported about using it the gameplay demo:[1]

It’s largely a debuff; each shot ensnares enemies with a black chain that glows purple, and greatly slows their movement for several seconds. The arrow can hop between multiple targets, chaining them together for the duration. The damage dealt by the arrows is negligible though, so this was almost purely a defensive skill.

Entangling Shot can be seen in action on video here: