Magical Items are blue in color, and are distinguished by having one prefix, one suffix, or both. An item with more modifiers than two is classified as a Rare item.

Magical items can be found from monsters or chests, earned as quest rewards, or crafted via the Artisans.

It's not yet known how powerful magical items will be. In early versions of Diablo II there were some very powerful modifiers that could only be found on magical items (not on Rares) which potentially made a magical item with two modifiers a better item than a Rare with five or six modifiers. This system may or may not be repeated in Diablo III.

Numerous magical items can be seen on the Known Items Listing. 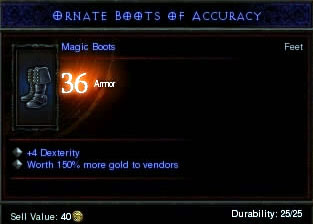