There are 20 known colors of armor dye, plus two special types: dye remover and transparent dye (which makes the item not display at all). Players purchase dyes in the game, then use them to recolor their equipment. Dyeing (not dying) will modify the color of an item; not the whole thing, though. Just some portion, often a border or sash, or else the background of an item while the metal remains a silvery hue.

What Can and Can not Be Dyed[edit | edit source]

Items that can not be dyed do not make up a visual component of the character anyway, so dying them would make no visible difference even if it was possible.

Dyes are purchased from vendors. All dyes are available at each dye vendor but not at the same time. Their inventory refreshes every 15 minutes.

Note that Bottled Cloud and Bottled Smoke are only available in the Collector's Edition and cannot be purchased in-game.

The following vendors are able to sell dyes to the player:

Some special vendors, such as Rodger the Alchemist or Javad the Merchant, will offer special discounts on items after a vendor-based event. For Rodger, once the player begins The Sacrificial Hermit event, he will sell the player dyes at half cost. 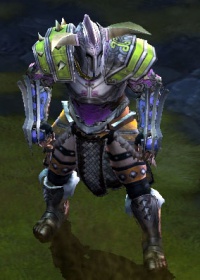 A Barbarian who, quite frankly, doesn't care what you think.

More information about how dyes will be obtained and how they will function in the game came from the Diablo 3 community manager, Bashiok, who answered some fan questions about armor dyes after they were revealed at Gamescom in August 2010.

'''Bashiok:'''I wouldn't take the mechanics of how dyes will be accessed as gospel just yet, there have been many ideas on integrating them with other systems, but for the sake of implementation they're drops. They could stay that way, we'll just have to see.

''Will the dyes be used solely on individual armor pieces or will there be patterns that change the entire scheme of the character's attire as well?''
'''Bashiok: '''There are specific slots that are able to be dyed, and it's generally the slots where dying them would actually matter (ie they have some surface area to be dyed).
The dye system is also not a tinting system. And by that I mean we don't apply a color shift to the entire piece of armor. Each piece of dyable armor is specifically designed and built with certain areas that can have their color changed. It could be as simple as a strip of cloth running down a chainmail chest piece, or as complex as an entire robe. We hand craft and designate these areas, and in combination with specific colors we've chosen, we can allow players to have a lot of additional visual variety, while maintaining a controlled look and style to the game.
''Are these dyes single colors only?''
'''Bashiok:''' They're technically a two color gradient, which allows us to achieve a more natural looking coloration, but for the sake of simplicity, yes they're presented as a single color.
I think the idea of having dyes apply effects in different ways is awesome, but don't forget there are plenty of other things going on gear that could be the basis for those types of effects as well.

In a fansite Q&A Blizzard confirmed that there were no special effects on dyes outside of changing an item's color: [2]

Q. Will the Collector’s Edition dyes have any sort of “particle effect” on the items, or are they simply dying them with a unique color?
A. No they don’t have particle effects. For now they can technically only be single color gradients. 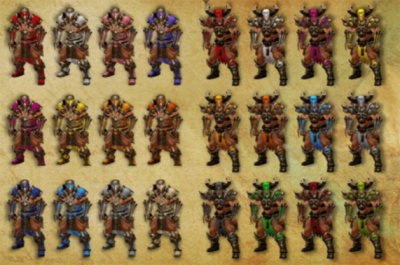