Various items in Diablo III will often appear with sockets. Sockets are holes in an item that can be fitted with gems (and only gems, at least in D3v), which add a wide-variety of bonuses to the item. There are 14 levels of gems, allowing the bonuses to grow quite large.

Sockets can be added to items by the jeweler, one of the two (formerly three) Artisans, and gems placed into sockets can be removed, undamaged, by the Jeweler. Socketing was initially handled by the Blacksmith, but the utility was transferred to the Jeweler during development, when the Jeweler lost his crafting abilities. 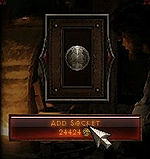 Though item sockets are quite common in Diablo III, the only thing that can be socketed are the four types of gems, and there are only three types of socket values with each gem: weapons, helms, and "other." This seemingly leaves a lot of room for growth, and it's expected that socket bonuses will be more varied, and that more socketable objects (perhaps jewels or even some new version of runes) will be added in the game's expansion(s).

Runes are found in Diablo III (though this may yet change) but they are only socketable in skills, not in items. There are thus no runewords or any sort of hidden gem-words, though the developers have said they like the idea of that concept.

All qualities of items can have sockets in Diablo III, and sockets often appear on pre-made Set and Legendary items. They can also occur from bonus modifiers on Magical and Rare items as well. In addition, the Jeweler can add a socket to all qualities and most types of weapons and armor, though nothing is yet known about the maximum number of sockets in a given item.[1]

in.Diablo.d3: Can we socket everything in D3?
Jay Wilson: Not every single slot, but any item the [[blacksmith]] can add sockets to, about 6 different ones, he can do. It doesn’t matter the quality of the item. If you have legendary boots without a socket, he can add one. Also, sockets can appear on any type of items. On Diablo 2 they only appeared on white items. In Diablo 3 a legendary, rare, anything, can have them. Sockets are treated like another affix.

Weapons are not socketable, in something of a surprise. They were during much of development, but are not set to be socketable upon release. This may, of course, still change.

Adding sockets to items without them is a fairly simple process, one that merely requires gold. The jeweler offers socketing on his NPC interface, and for a price he'll add a socket to any valid item. The only demonstration of this yet seen was in the Gamescom 2010 Artistan movie, when the Blacksmith handled socketing. In that video he punched a socket into a plain buckler for an exorbitant (according to Jay Wilson) price of 24424 gold.

Bashiok added some more details about socketing in August 2010, though this info may be well out of date by now.[3]

Bashiok: As far as I last heard it (and this is subject to change of course) the blacksmith can add one extra socket (max) to specific items, up to the maximum allowable. So if (for example, I’m not claiming max socket numbers) a sword can have two sockets, but drops with none, you can add one socket to it.

How do items that take up 2 slots in the inventory have more than 2 sockets?
Bashiok: Requiring you to equip the item to gem?

Also, will they all looks visually appealing like for the Shield example, or will they just be stuck to the center.


Bashiok: The shield one was stuck to the center. 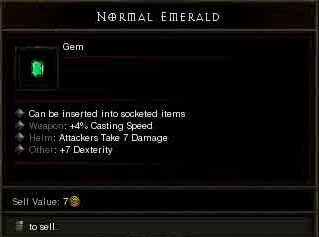 The bonuses granted by socketed gems have changed repeatedly during development. Even the types of gems have undergone changes, with only Amethysts, Emeralds, Rubies, and Topazes remaining in the game into the beta test. Previously we saw Sapphires and Diamonds but they have been removed, with Skulls, the seventh type of gem found in Diablo II, never appearing in Diablo III.

The first demonstration of gem socketing was found in the Artisan Video. In that video, when a level three (out of 14) Emerald was viewed, the potential bonuses were shown as:

These stats changed completely during later development, and as of January 2012 during the beta test, a L3 Emerald grants: