Weapons are equipped in the hands and used to deal damage to monsters, whether direct physical damage or by enhancing attack spells. Most of the weapon types seen in Diablo II return in Diablo III, but there are some new weapon types as well, and lots of new rules and features to weapons as well.

One major change are the class-limitations. Caster weapons, such as wands and daggers, can only be used by the Wizard and Witch Doctor, while lots of heavier melee weapons, such as spears and polearms can only be used by the combat characters. The limits to Class-Specific Weapons continue to evolve during development, and are not at all fixed in their final form, yet.

Hovering over a weapon shows its stats compared to what you currently have equipped.

The weapon hover-over now includes more precise damage and attack rate values, and currently displays the following stats for any given weapon:

Weapons in Diablo III show their min-max damage, as well as a DPS (Damage Per Second) display. This figure is just the weapon damage / attack rate; it doesn't actually factor in your character's stats or other equipment damage bonuses, or attack rate increases, etc. You need to equip the item and look at the Character window for that.

Diablo III will not include a DPS display on the screen or the character window, that calculates a running, up to the second, damage output. Bashiok confirmed this in a forum post in August, 2010, when replying to a question about DPS displays in WoW. [1]

There are no DPS charts in World of Warcraft.


People have though created add-ons which attempt to compare the DPS of each player, as well as healing output, absorption, etc. These aren’t included in the game, nor are they supported. Personally I think they can be useful to a point, but are abused by people who don’t know how to use and read them properly, and are too commonly relied on as a means to judge the performance of others.

In any case, Diablo III doesn’t provide customizable UI through add-ons, and we have no intent to provide DPS charts.

The following weapon types have been confirmed as returning in Diablo III. These weapons were seen in gameplay movies, during play demos at Blizzcon, or were mentioned by Blizzard employees. [2]

See the Class-Specific Weapons page for full details and explanations from the developers.

The Barbarian is able to dual-wield virtually every one-handed weapon he can equip. (Though there are a lot of one-handed weapons he can't use; such as wands and short staves that the spell-casters use.) The Barbarian can not, however, dual wield two-handed swords, or use them with a shield as well, in Diablo III.

The Monk can also dual wield, but only with his class-specific fist weapons. It was initially said that he would have He will supposedly have a few skills that can only be used while wielding fist weapons.

The Wizard and Witch Doctor can not dual wield weapons, though the Wizard at least has the option of wielding a weapon in one hand and an orb (rather than a shield) in the other. Orbs offer offensive bonuses, almost like a second wand or other caster weapon, rather than the defensive bonuses or blocking that a shield provides.

The Demon Hunter can not dual wield melee weapons, but she can dual wield her class-restricted pistol crossbows. All other bows and crossbows are two-handed.

There are no known skills that can only be used while dual wielding.

There is a trait, Frenzied Attacks that both the Barbarian and the Monk can enable. It provides them with (slightly different) critical hit bonuses while dual wielding.

Bashiok spoke about the theory behind dual-wielding, vs. using a sword/shield or a two-handed weapon, in early September, 2010. [3]

The general philosophy and intent for the differences between the three main melee types is to make them all viable, but with obvious trade offs. For dual-wield versus two-hander, it’s currently balanced so that it’s essentially an aesthetic choice. If you think it looks cool to run around with a big two-hander, do it, if you get two awesome one-handers, then use those. Obviously that comes down to tuning affixes and such as it’s one item versus two, but that’s the intent and how it is balanced and works in the game right now. Compared to using a shield it should be viable either way, but you’re obviously gaining some survivability with a shield. The drop in damage output should be accurately offset with a better chance to live, ability to take some greater risks, etc.

Durability is a feature of items in Diablo III, though it was not in the game during much of the development cycle. Eventually the D3 Team decided that repair costs were too useful a gold sink to leave out of the game entirely. Nothing is yet known about repair costs or how frequently they will be required.

The issue of weapons that "bind" or stick to a given character, is a contentious one. No items in Diablo II were BoE (Bind on Equip), BoP (Bind on Pickup), or BoA (Bind on Account). There are plans for items in Diablo III to be Bind on Equip (either to a character or to an account), since this has the effect of removing those items from the economy. Once a player equips such an item, it can be removed from that character and sold or salvaged, but it can not be given or traded to another character.

Jay Wilson spoke about the current binding weapon plans as of August 2009. [4]

Jay Wilson: We have no “Soulbound” or bind-on-pickup, except for quest items. We do have bind-on-equip for the highest end items in the game. We targeted, roughly, any item above level 85. These we will do as bind-on-equip. The reason for this is that we want people to be able to trade them, but we also want to remove the high-end items from the economy. One of the greatest ways that you can do that is with bind-on-equip.

What we don’t want is to have a situation where you find something on the ground like, “Oh, man. This would be a perfect weapon for my Monk. Oh, but I just picked it up and now it’s on the wrong character.” We don’t want that at all. Most of our focus on Diablo is as a trading game. So, if you take trading out of the item space, you ruin the core of the game. Finding a really great item that is not for you is still a great event because it means you have a bartering tool to get the item that you do want. We definitely want to make sure that that still exists. 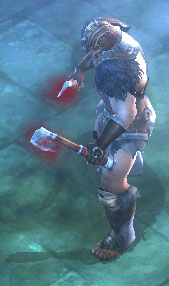 The Diablo III artists are endeavoring to make the items look as consistent as possible between their appearance on the ground, in the inventory, and when equipped on the character. Not all effects can come through; flaming weapons don't show their flames in the inventory, but when equipped in the game they should glow, burn, shimmer with ice, crawl with bugs, and other appropriate visual effects.

It's not yet known what all the visual effects signify; some are fairly obvious, with the color-coded damage types, but players will need more experience to recognize the type of damage or enchantment an item packs purely by its in-game visual appearance.

Weapons get their color and style from their design and enchantment, not from dyes, which can only be applied to armor.

The appearance of armor in Diablo III varies by the character wearing it; the same chest piece will look very different depending on which class equips it. This is not the case with weapons though, as @Diablo stressed in November 2010.[5]

Armor is going to be custom-designed to suit the visual style of character wearing it. Is this going to be the case for weapons too? --Equestrionaire
No, weapons are set no matter who’s holding them. --Diablo