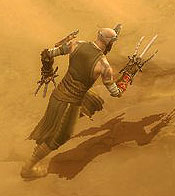 Fist weapons are melee weapons that can only be equipped by the Monk. Fists vary widely in appearance, ranging from simple gloves, to spiked clubs, to huge punching mitts like Hulk Hands. Others are bladed weapons mounted on the wrists, reminiscent of the Assassin's claw weapons from Diablo 2.

Since range is not a factor on weapons in Diablo 3, these Fists work just like swords and spears and other much longer (looking) weapons. Fists have a faster attack speed than other one-handed melee weapons, though they deal a bit less inherent damage in compensation. Faster hitting is useful for a Monk who needs to restore resource via a Spirit Generator skill, and Fists can have other affixes that are of special use to the Monk.

The Evolution of the Fist[edit | edit source]

When the Monk's weaponry was first revealed the developers spoke of some weapons possibly enabling or improving some of the Monk's skills, though this concept did not make it into the final game. Jay Wilson in an October 2009 interview. [1]


Jay Wilson: We're talking about that. One of the things we’ve talked about with the Monk is that a lot of his skills don’t really use his weapons. So he’s doing melee skills with his weapons almost holstered. For instance... the Crippling Wave skill seems like it should be a staff skill. It’s kind of AoE, he does it and affects a lot of guys around him.

So it’s a possibility that we'll do skills and redefine them based on combat styles and have those styles have a weapon preference.