Pylons are a sort of super-Shrine and can only be found in Nephalem Rifts and Greater Rifts accessed via Adventure Mode in Reaper of Souls and the Ultimate Evil Edition. As with Shrines their chance of spawn is random and they can possess one of a few bonuses listed below. 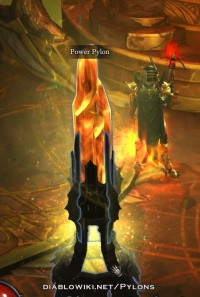 Pylons and Shrines have been tweaked in effect and effectiveness several times since Reaper of Souls was released. The biggest change came in Patch 2.1.2 when the Speed and Shield Pylon were buffed, and the Conduit Pylon was reduced in duration in Greater Rifts. Patch 2.1.2 Notes[1] 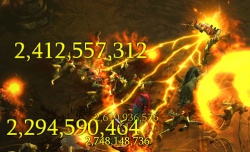 Further changes were made after the patch had been in testing on the PTR for a couple of weeks. A blue post from early December, 2014:[2]

As we stated previously at BlizzCon, we want to avoid removing Conduit Pylons entirely. Conduits feel awesome and exciting when you get them, and that’s something we want to preserve. Not every player is (or will want to be) a top tier competitor, and it’s important that we retain these exciting moments for everyone. However, we recognize that Conduit is currently too good and we’re planning to nerf it.

Specifically, we want to lower its effectiveness against single targets. We’re making some changes in the next PTR patch to accomplish this. While you’ll see little to no change (and potentially some improvement) against multiple targets, it will be significantly less useful in single target scenarios. In addition, the damage dealt will scale off your weapon damage instead of the Greater Rift level. This means it will feel strongest at lower tier Greater Rifts, about the same at Greater Rifts that match your level of gear, and less effective at higher Greater Rifts. Overall, it should still feel cool and powerful to use, but not an ultimate game breaker or something you should hedge your entire build around.

Our intent is that we want there to (a) be a variety of pylons you can encounter and (b) no individual pylon should determine your success or failure. We know that’s not where we’re at right now, but that is the ultimate goal.

As an unrelated (but nifty) addendum, because sharing is caring: The Speed Pylon will also be changed slightly to automatically destroy breakable objects and doors while you retain the buff. It felt a little weird to run full stop into a door with this buff up, so now you’ll just be able to rush right through barricades and the like. Personally, I’m excited to attempt breaking the sound barrier with Warzechian Armguards and Steed Charge on my Crusader with this. Maybe I can break 88 miles per hour!

Both these changes will be in the next PTR patch, and I highly encourage you to give them both a try once they go live.

Pylons feature in the following achievements: