ADVERTISEMENT
From Diablo Wiki
(Redirected from Life After Each Kill)
Jump to: navigation, search

While less valued than Life per Hit, LpK is a useful modifier in Reaper of Souls, and much improved in value from its Diablo 3 origin. Some reasons for the increased value of this modifier in the expansion:

Life per Kill can be found on numerous item slots in Reaper of Souls, and with higher numbers than in Diablo 3. Characters can easily exceed 10,000 life per kill with several items boosting it.

Life Per Kill vs. Life Per Hit[edit | edit source] 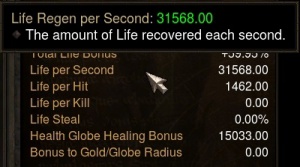 Life After Each Kill[edit | edit source]

This modifier was called "Life After Each Kill" in Diablo 3, and usually abbreviated to LAEK, or more often LAK (Life After Kill). Despite working exactly as it does in Reaper of Souls, this modifier was not much valued in Diablo 3 since it wasn't necessary. The much smaller health pools were easier to keep filled by health orbs and other healing item affixes and skill properties, most notably Life Steal and Life on Hit. 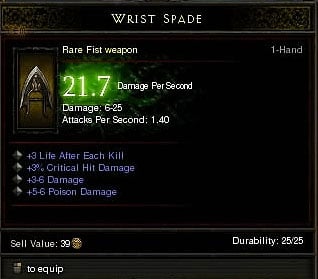 Pre-release image of a rare crafted fist weapon with +3 LAEK.