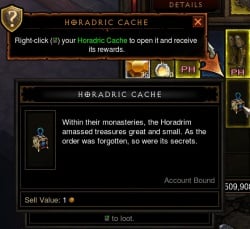 Horadric Caches (AKA "goodie bags") are awarded by Tyrael for completing all 5 randomly-selected bounties in each Act. This feature is only available in Reaper of Souls, and only in Adventure Mode. These "goodie bags" are much sought since they can drop special legendary items (most notably the Ring of Royal Grandeur[1] ) that can not be obtained anywhere else.

Patch 2.3 added Horadric Cache materials that are required for high level item crafting and certain Kanai's Cube recipes, and that can only be found in the Caches. Patch 2.3 also added the Bonus Cache, a second Horadric Cache awarded for completing all five bounties in the current Bonus Act, which doubles the total cache materials earned. When the bonus act is completed, another act is randomly selected as the next bonus act, so players can do all 5 acts for bonus in the same game, if they go in the correct sequence, scoring a bonus cache for each. (Prior to Patch 2.3, there were 2 bonus acts in each game, but they only awarded double Blood Shards and did not switch once an act was completed.) 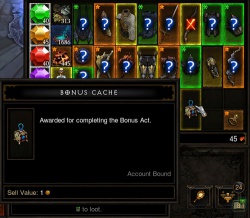 Since Tyrael awards Caches to every player in the game, regardless of their location in the game (in any Act or even a Rift), or participation in any or all of the individual bounties, split-farming is a very popular way for multiple characters to spread out and each do bounties on their own, racking up Caches much more quickly than the could solo, or while all running together on the same bounty. Players can also treat their clan or friends to free caches by completing an act but not claiming the bounty, then announcing that anyone who wants the cache should join their game.

While the difficulty level and the character level is locked in when a cache is earned, the contents and the smart rolls are not set until the cache is opened. This means that players can farm caches with their most powerful character, then twink them to another character of a different class, who can open them and get appropriate items for their class, thanks to the smart loot feature.[2]

Patch 2.3 also greatly boosted the chances for legendary crafting plans (including set plans and gem plans) to drop from Horadric Caches. Thus players in a new season who have not yet found all of the Crafting plans will often see 6-8 of them drop from each Cache and bonus cache, until they have taught them all to the Blacksmith and Jeweler. 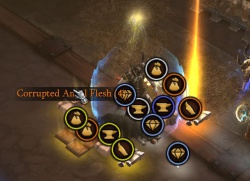 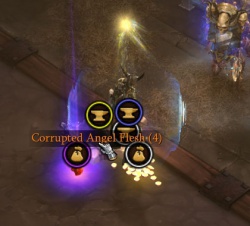 A Bonus Cache perk, which doubled the materials awarded for completing the act bounties in a specific order, was removed in Patch 2.5, with the bonus benefit applied to all act bounty caches.[3] The bonus cache, awarded in addition to the act's cache, contained only gold and materials. There are several small stacks of white, blue, and yellow materials, plus the same amount of orange, Horadric Cache materials as fall from the main Cache. This doubling of the total cache mats is the main benefit of earning Bonus Caches.

Act One caches are the only source of Khanduran Rune material. 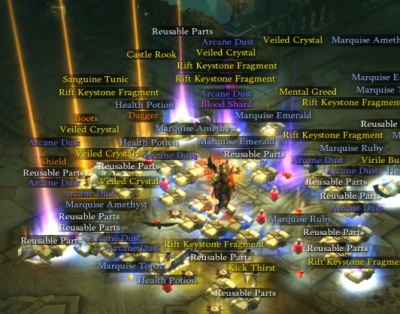 Loot from 10 caches in one spot.

Act Two is not a popular Act to Farm thanks to several large/slow bounties and a lack of top quality Cache legendary items. Act Two caches are the only source of Caldeum Nightshade material.

Act Three is among the slowest acts to farm Caches in, and the number of legendary items makes finding one specific of these items the most challenging. The Pride's Fall helm is the one most sought, as it's arguably BiS item several builds that require high resource regen, such as the M6 Demon Hunter.

Act Three caches are the only source of Arreat War Tapestry material.

No legendary items are specially tied to Act Four Caches, so if a legendary cache item is earned, it will be randomly selected from the other acts. This gives a 1/21 chance of any specific cache legendary.

Act Five is by far the slowest act to farm of the five, thanks to numerous very large areas. Patch 2.3 changed the Idiot Arrow timer from five minutes to one minute, making this act much more tolerable for hurrying players.

Act Five caches are the only source of Westmarch Holy Water material. 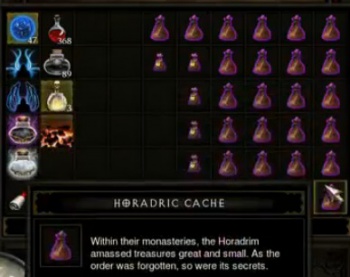 Horadric Caches in bag form, from the RoS beta test.

Horadric Caches are limited in what they can drop, and fairly predictable. Each Cache will always hold 5-10 materials (a mixture of white, blue, and yellow), 1-4 gems, 2 Nephalem Rift Keystones, an occasional small stack of Blood Shards (random in number), 1 or 2 Rare items, and a very occasional random legendary item. After Patch 2.3, caches were guaranteed to issue at least one of their Horadric Cache legendaries if earned on T6 or higher, along with 1-4 stacks of the appropriate Horadric Cache material.

A thorough study was undertaken by Diablo.IncGamers.com in early April 2014 during Patch 1.0.2, when 102 bags gathered on level 70 Normal difficulty were opened (on video) and the contents recorded.

Horadric Caches were seen during the Reaper of Souls beta test. Initially they were awarded for every single Bounty, as well as finishing an Act of Bounties. Caches were also awarded from completing a Nephalem Rift (at that time the Rift Guardian only dropped a couple of items, like a random Elite, with the main reward coming in the bag back in town).

What items were obtained from caches, and how the game determined them, evolved quite a bit during the initial implementation. Initially Caches were very random, and the only thing that improved on higher difficulty level was the quality of the Gem (Master and higher could yield Imperial quality gems).

Initially caches did not snapshot on the difficulty they were earned on, and players soon learned to farm up caches on a lower difficulty and then open them on Torment 6 to get better drop odds. There were also rumors about exploiting the Legendary pity timer to increase cache quality, though they were ultimately debunked. [4]

The whole system was much improved in Patch 2.0.5 when the legendary drop rate of caches farmed on Torment 2 or higher began to scale up, increasing to 100% for caches from Torment 6. This rewards players who earn caches on higher difficulty levels, rather than split farming them on easy settings.

Along with split farming, a common way of sharing caches within clans or friend lists is for one player to complete the bounties, then announce in chat that players can join his game for the free cache. Every character in the game gets a Cache when the reward is claimed from Tyrael, whether they were in the game or not while the bounties were completed.