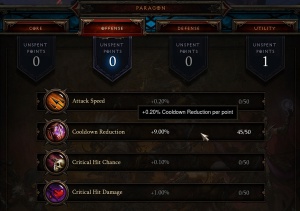 A Cooldown is a duration of time after casting a skill or drinking a potion before that action can be repeated. Cooldowns are used extensively in Diablo III to add a level of strategy and a time-based resource management, as well as to limit the power of very high level and powerful skills. (Skills can be made very powerful if they can only be cast every 30 or 60 or 120 seconds.)

Cooldowns and other time-related buffs and debuffs are shown visually with a sort of second hand that turns around inside the icon, either on the belt interface or as a pop up. The icons for skills on cooldown are usually grayed-out, with the icon returning to color as the second hand moves around the inside of the icon.

Cooldown Reduction is a major factor in character power and there are many methods to reduce the duration of cooldowns. These include some skill runes, but reductions are mostly obtained via item properties, with many types of items rolling up to 6 or 8% cooldown reduction. Cooldown reduction can also come from a Diamond socketed in the helm, and via Paragon Points.

Fans were initially surprised by the long cooldowns planned for skills in Diablo 3, as nothing like this was present in previous games in the series. The debate kicked off in July 2011, when Bashiok revealed that the highest level Barbarian skills had two-minute cooldowns.[1]

The three final skills of the barbarian tree all currently have 2 minute cooldowns. There are ways to augment those cooldowns slightly of course, but you’re still going to want a mix of skills that complement each other.

This information was offered without explanation or context, and set off huge fan debates. While some players disliked the concept of long cooldowns in a Diablo-style fast action click-fest, a lot of players, especially those who have grown used to multi-minute cooldowns in games like World of Warcraft and Rift were not upset by the concept coming to Diablo III. Bashiok added some explanation a few days later, repeating many of the arguments fans had been offering since the initial word hit.[2]

…Diablo II had a single resource mechanic (mana), and the biggest end game skills in Diablo II are low-to-mid tier skills in Diablo III. The big “end-tier” skills we have are more complex and usually wouldn’t make sense as spammable skills, or would likely outright have to be pulled from the game if it turned out they ever could be spammable. And we have varied resource systems that we can’t just throw a problem-solver at, like Diablo II could with mana potions.

For instance Call of the Ancients literally calls down the four barbarian ancients to fight alongside you. How would that work if it was spammable? Should we make it cost 100% resource to keep you from being able to spam it, and then leave you drained to Cleave back enough Fury to follow it up with anything? That doesn’t sound like something *I* would take. Maybe someone could find a build for it, I don’t know.

Bottom line is that cooldowns allow for skill complexity or power by limiting them in a meaningful way because it can mean long-term balance even as stats inflate. We do want to make sure we’re only using them where appropriate, though.

Most fans seemed to accept these arguments, and others in favor of the system, as demonstrated by a vote run by Diablo.IncGamers.com on the issue. As of July 19th, nearly 60% of voters either loved or liked the system, while 35% disliked or hated it.[3]

Some games also use a mechanic called a "global cooldown", which will affect all spells, skills and items. It's a measure making it easier to balance the game, limiting the number of things a player can do at once. All skills are not necessarily affected by global cooldown, or trigger a global cooldown. There is no such feature in Diablo III.

Cooldowns were originally set primarily on CPU/GPU intensive graphic effects that could cause lag in multiplayer games when a player spams that spell. That's not an issue in Diablo 3.