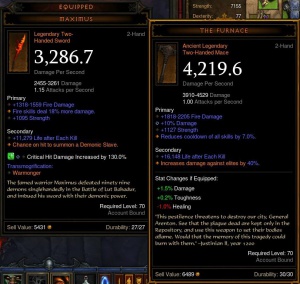 Ancient Items were added into the game in Patch 2.1.2 after extensive testing on the PTR. Ancient is a sort of item modifier, an enhanced version of an existing legendary or set item with higher values to most of the affixes found on the item. Ancient versions of all legendary and set items can be found, and these will almost always be a big upgrade over non-ancient versions of the same item.

Ancient occurs only on level 70 items, though such an item may have a -clvl req modifier and be usable before 70. (Or used from level 1 with a Gem of Ease or the Work of Cathan cube recipe. Ancient items look just the same lying on the ground, but once identified they have a colorful border on the tool tip display (orange on legendaries and green on sets) and show with double brackets around the item name in clan chat. (Double bracket added in Patch 2.3.) 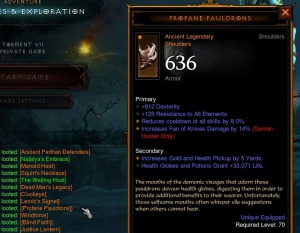 Double Brackets set off Ancients.
Ancient items look identical when they drop; there is no way to tell if an item has rolled ancient until it is ID'ed. Once identified, Ancient items have an orange border (green for set items) around the outside of the item tooltip, and say "Ancient" in the item name.

The appearance was given a fix in Patch 2.3, when Ancient items gained a {{double bracket}} around their name. (Normal legendary or set items have just {single bracket}. During PTR testing, this double bracket showed up even on items that hadn't been identified yet.

A small % of level 70 legendary items found from monster/chest drops on Torment 1 or higher will spawn as Ancient.

Ancient is most valuable on weapons, for the big increased damage. It is also very useful on most armor, as mainstat and vitality and resistance all roll at up to 30% higher. Jewelry is much less sought as Ancient, as most of the best affixes on jewelry are not affected by the item being Ancient. 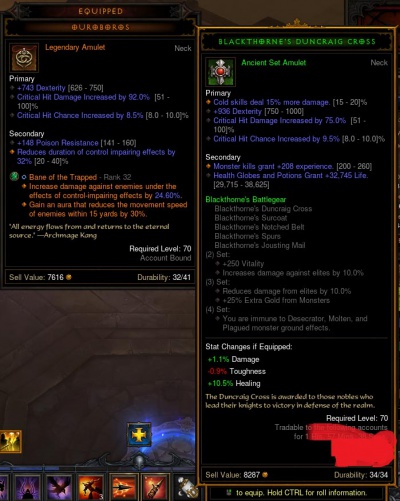 Some affixes are not boosted by occurring on an Ancient item, and these include many of the most powerful affixes in the game, especially those found on Jewelry.

For instance, as of Patch 2.3 a BiS amulet gets zero boost to the primary affixes by rolling Ancient, as Crit damage, Crit chance, socket, and +elemental% damage are unaffected by Ancient.

Affixes not affected by Ancient, on all types of items, include:

One major point of debate concerning Ancient Items during their PTR testing was the varying utility by item slot. An ancient item of the same type with good affixes was always a big upgrade, but since Ancient items are as random as all other items in their affix range, it's possible to find Ancient items that are not upgrades, since their affixes are not ideal.

While many players like Ancient items and the added layer of item hunting and gearing up that they create, some players are vocal critics. The usual complaint is that Ancient is a bandaid type fix to an item system that needs more depth and diversity, and just makes player look for the same gear twice.

There is also regular criticism[1] of Ancient Weapons, since the damage buff is so large that players who wish to compete at a higher level feel that an Ancient weapon is mandatory. This isn't so bad for builds that can use a variety of weapons, but for builds that require a specific weapon, especially if that weapon is a very rare drop, the need to find that item and as an Ancient can prove impossible.

Blizzard addressed this complaint by adding various item rerolling and upgrading recipes via Kanai's Cube in Patch 2.3, especially the Law of Kulle recipe, which allows players to reforge a legendary items, thus greatly increasing the odds of scoring that item in Ancient form.