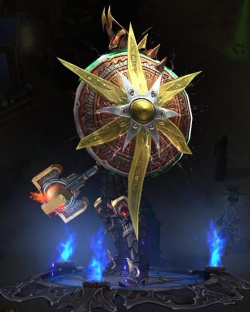 Equipped on a Crusader.

Unrelenting Phalanx is a legendary Crusader shield found in Reaper of Souls. This item is a Crusader-restricted item and will very seldom be found by any other class. The Smart Drop system ensures that this shield will usually roll with Strength, or at least never with Intelligence or Dexterity.

This shield was added as a Seasonal Legendary in August 2014 during the PTR testing of Patch 2.1. The stats and visual should be considered a WiP until Patch 2.1 goes live. This shield was initially just a regular shield, before being switched to a Crusader shield, which is more appropriate given that the bonus property was Crusader only. The name was also changed, from "Amazonian Parma" to "Unrelenting Phalanx" while still on the PTR.

The final stats for this item aren't yet set. Currently it can only be found on the PTR during Patch 2.1 testing. The legendary property seems likely to remain the same though, and it's obviously of use to Crusaders who specialize in the Phalanx skill.

Several examples of this item equipped on level 70 characters can be seen below. More examples via DiabloNut's armory will be available once the shield goes live. 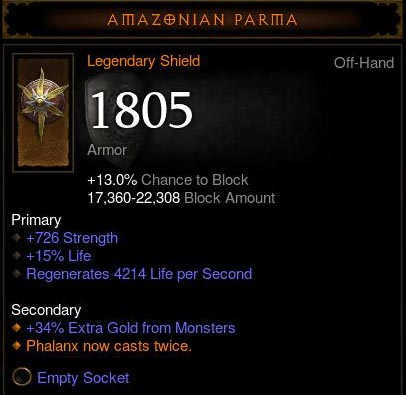 Sample from the PTR, when it was just a regular shield and not Crusader restricted. The final legendary property changed slightly from this initial version.

The item's lore relates directly to the Amazon culture in Diablo 3, which is focused on the island of Skovos and fairly similar to the mythological Greek warriors and culture of Earth. Hence the lore referencing a slightly name-changed Greek God (Hephaestus, the god of Blacksmiths and a famed weapon/armor maker), and athletic games that sound very like the ancient Olympics.