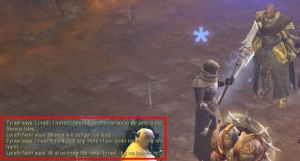 The dangers of Skovos mentioned by Tyrael in Reaper of Souls dialogue.

Skovos island and city can be found on the south end of the world map as part of the Skovos Isles, the home of the Amazon warriors found in Diablo II. The Diablo 3 artists created extensive concept art for this area pre-game (mostly in 2006-2008) and it's often speculated that Skovos will show up in the game at some point, possibly as the setting for Act Six in the second expansion.

It was revealed during Blizzcon '08's Lore & Art Panel for Diablo III that Skovos will not be visitable by the player during the events of Diablo III, but that internally they fleshed it out quite a bit so that it could be made reference to by people in the game world.

The area was not forgotten about, and when it was not the setting of the first expansion pack (Reaper of Souls set in Westmarch), many fans began to speculate that Skovos was a very likely setting for Act Six. Fan articles have detailed the reasons why in considerable details[1], and in Reaper of Souls there are references to Skovos being a very dangerous place where Nephalem are vanishing.

The city is located on an atoll in the Sea of Light, and seems to primarily be a trading harbor for the rest of the Skovos Isles. Skovos' society was, supposedly, founded by a human and angel. The setting includes beautiful sunny beaches, tangled dense rainforest jungles, waterfalls and rivers, and sunken Grecian temples beneath and within the city.

Various pieces of Skovos artwork, all official concept art created by members of the Diablo 3 team.