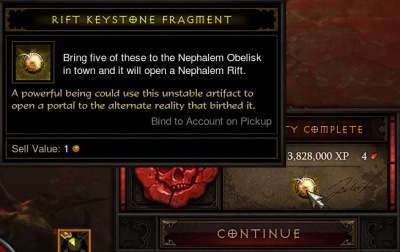 Rift Keystone Fragments, usually called "Rift Keys" or "Keystones" are a kind of material awarded for completing Bounties and opening Horadric Caches. Rift Keys are spent to open Nephalem Rifts, and have no other function or purpose in the game. These materials are found only in Reaper of Souls and in Adventure Mode.

Prior to Patch 2.1, opening a Nephalem Rift required 5 rift keys, and all players in a game could enter the same Rift once it was open. (This created the Rift it Forward phenomena.) In Patch 2.1 the Rift Key system changed to 1 Rift Key for each player who wished to enter the rift. The same applies to Greater Rifts, which require 1 GRK of the correct level for character who wishes to enter.

A new kind of rift key was added in the Patch 2.1, tied to Greater Rifts. To open these special types of Rifts, players must find a GRK, which is a random drop by any Rift Guardian. Completing a Greater Rift within the 15m timer will earn higher level GRKs.

From RoS' launch up until Patch 2.1, Rift it Forward was a popular technique (exploit?) to share the costs of Rift Keys and rewards of Nephalem Rift completions. Patch 2.1 killed this system by changing Rift costs from 5 keys to open a rift, to 1 key per each player upon entering the Rift or Greater Rift.

When the RiF system worked, the technique was for a powerful player to solo a Rift on a high difficulty level, then to use the public or clan chat to offer spots in his game to other players just before he completed the rift. A weaker character or characters would join in and enter the rift, thus getting their share of the Guardian's drop, plus the exp and gold reward for finishing the rift. In exchange, the weaker character would open a new Rift in that game, and then exit, leaving it for the powerful character to solo, and saving him the cost of any rift keys.

This system benefited weaker characters by giving them free experience, gold, and items, and benefited powerful characters by enabling them to do Rifts without having to farm for or spend their own Rift Keys. Though the entire system is technically an exploit, Blizzard commented approvingly[1] on it, and seemed to have no plans to end Rif'ing... until Patch 2.1 suddenly changed the rift costs and did just that.