All Keywarden Keys were removed from the game in Patch 2.3, when the Infernal Machine was made much more accessible. Instead of Keywardens dropping keys, they now drop the Machines directly, thus cutting the materials and time required to farm them to 1/4 what it was formerly. 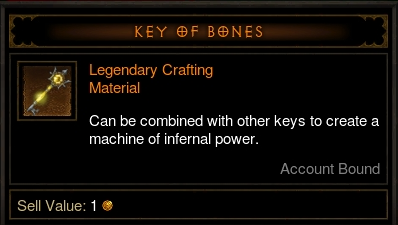 The Key of Bones is a special item dropped by Odeg the Keywarden, who can be found somewhere in the Fields of Misery in Act One. Four keys, one from each Keywarden are required to create each of the four Infernal Machines, which are used to open the portals to the Ubers as part of earning a Hellfire Ring or Hellfire Amulet.