Executioners are a corrupted human type of demon monster added in the Reaper of Souls expansion pack. These enemies are found only in Act Five, as well as randomly in Nephalem Rifts. They are classified as a Reapers.

These monsters are dangerous melee fighters, using the huge blades mounted to their arms for fearsome slashing attacks. The heavy shock troops of Malthael's army, Executioners are hulky monsters jumping around and smashing stuff.

These superunique Executioners can appear in the following areas:

“These monsters were once the most notorious and reviled criminals in Westmarch, drawn up from the deepest, darkest cells of the city’s prisons. Each was worse than the last: heartless murders who had butchered countless men, women, and children. In death, Malthael birthed them in forms that matched their twisted, callous souls, creating perfect instruments of slaughter. The executioners have earned their name.”

These were once men, mutated into demonic forms by Malthael's vile sauce. 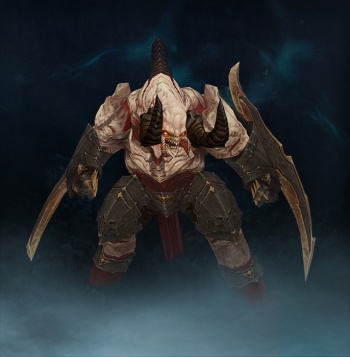