The Pandemonium Fortress is an ancient fortress in Pandemonium that once contained The Worldstone. Archangel Tyrael saw its construction, and since then the fortress changed owners many times - some times under Angels, some times under Demons. Each of them added to its fortifications.The fortress is known to change in appearance according to who controls it, but according to Tyrael it has never been in its current state while under any Angelic control before.

In Reaper of Souls, the Pandemonium Fortress is a 3-level dungeon. It is the last area before facing Malthael. The player enters it from The Ram after completing Breaching the Fortress quest. The map of the area is separated into various segments that you travel through. Red gateways known as Death Gates sometimes connect paths that are not directly attached,and throughout the area there are archways that at filled with electrical field that stun (and possibly freeze) as well as damage players if passed through. 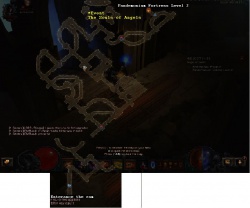 Waypoints are special plates on the ground that form a network of jump points allowing players to instantly teleport between them. The nearest waypoint for Pandemonium Fortress Level 1 appears

Pandemonium Fortress Level 1 is in some way involved in the following achievement(s).