CD and CC display in the character window.

Critical Hit Damage (CD or ChD) determines how much damage a critical hit deals in Diablo 3. Raising this figure is a key way to increase a character's DPS, and skills and items that add to this stat are much sought after.

The base critical hit damage of a naked character is 50%, but well-equipped characters should deal at least 300% CD, and figures over 500% are not uncommon when dual-wielding in good gear.

Critical hit Chance (CC) works in tandem with CD, and is as or more important. While Critical Damage is a huge factor in a character's overall damage output, Critical Chance is as well, plus many procs trigger off of crits, and a fairly high Critical Chance is considered essential for many builds to function properly.

In D3v2 and Reaper of Souls, Critical Hit Damage can be raised through Items, Paragon Points, and a few passive skill bonuses. Though higher level emeralds exist in RoS, the total CD values are smaller than they were in D3v, since weapons can no longer roll up to 100% (or 200% on two-handed weapons). 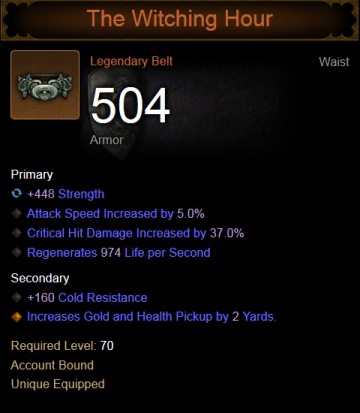 Critical hit Damage can not be found in every item slot, and slots not listed below have no items with CD. The maximum Critical Hit Damage per item slot is:

Consider that dual-wielding 260% + 50% paragon points + 50% inherent is 360% without adding a single point of critical hit damage from gear. Since it's not difficult to add 150% from amulet + rings + gloves, that's 510% without any legendary gear or skill bonuses.