Unburied are large, spike-covered undead type monsters. They are undead "construct" that is created wherever bodies are dumped together unceremoniously.

They are huge and slow of foot, but have a fast, smashing melee attack and can be quite dangerous in large packs. 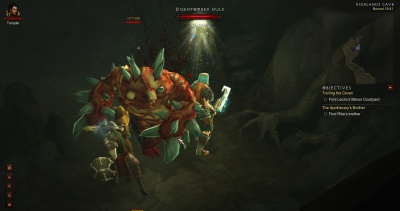 Superunique versions of Unburied have a chance of spawning in the following areas:

The unburied are formed from human corpses that were flung into mass graves without a proper burial. This hideous amalgamation of bodies decomposes together into one being, bound by some foul magic. For all my knowledge, I could only flee from it... and I would expect any other sensible person to do the same. -- Abd al-Hazir

This is what Abd al-Hazir has to say about they way this monster is created:

"Being born out of pits of human misery, these beings feed on human suffering. Wherever bodies are dumped together unceremoniously, the unburied may rise". That make the Unburied another type of undead construct.

It seems to be a mystery exactly HOW these Unburied come into existence. Where dumped bodies are held, they apparently start their existence, but is there a necromancer behind it, or is it some general perversion from Diablo that just permeates the soil to the point where bodies apparently merge into this monstrosity. This merge will also pull in any other inanimate object in the closest vicinity, such as rocks or pieces of wood. The Unburied is the result of it's surroundings, there is no single design, regardless of who or what is conjuring them. [1]

The Unburied is formed by the fusion of soil, rock, human bodies and angry souls. The spikes that jut from its body are shards of stone ripped from the earth during the development of the creature.

In any case, besides being a bit tougher than other creatures, they do die after being pummelled enough.

Behaviorally, the Unburied do not have the Frenzy ability of the Thorned Hulks, but Unburied hit quite quickly right from the start of the fight, swiveling their entire body at the waist to deliver right-left-right-left hits at a rapid pace.

The Unburied was shown the first time in the BlizzCon 2008 demo and gameplay movies and was added as a journal entry to Abd al-Hazir's journal: Entry 39