Health potion in Reaper of Souls.

The only type of potion in Diablo 3 and Reaper of Souls is the healing potion, which grants an instant heal of 60% of a character's maximum health, with a 30 second cooldown before another potion can be consumed.

Earlier games in the series had multiple quality levels mana potions and rejuvenation potions, and there were multiple quality levels of healing potions in Diablo 3 vanilla. The potion system was greatly simplified in D3v2 and RoS, with only one type of potion, whether found at level 1 or level 70. Reaper of Souls adds six Legendary Health Potions which grant identical healing to a normal potion, but add a bonus defensive effect for 5 seconds.

All are Reaper of Souls and Torment-only item finds, from targets level 61 and higher. See the individual potion pages for fuller details and screenshots. 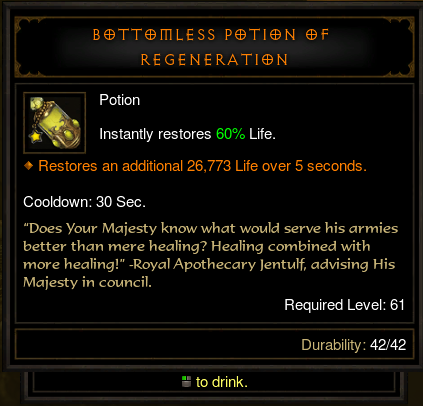 The role of potions in Diablo III changed repeatedly during the development. Early on, there were health and mana potions of various quality levels, much as we saw in Diablo II. As development progressed this system was greatly altered by the addition of unique resources and resource management issues for each class, changes to make the combat system more strategic and less spiky, the addition of health globes, items and skills designed to provide healing and damage mitigation, and much more.

As a result of these changes, mana potions were removed entirely, and the use of health potions was changed from a spammy drinkalot system like Diablo 2's to a sort of emergency button that provided big healing, but came with a lengthy cooldown. Health potions went from no cooldown (Diablo 2 style) to a moderate cooldown (8 seconds as of Blizzcon 2010), to the 30 second cooldown upon launch.

Jay Wilson talked about the concept and execution of health potions during an interview from Blizzcon 2009. [1]

Jay Wilson: We did put health potions back in, but they play a very different role. You can't spam them like you used to, you can only use them about once a map. The purpose of those is to take the edge off the loss of health. I don't have health, or I've got half health, do I want to use a health potion, or do I want to risk it? Ooh, I've got 10% health, it's not even a decision. That's a really interesting decision, and it makes potion use a fun part of the game.

IGN: Why not auto-cast a potion if you're down to 10%?
Jay Wilson: Because it takes the choice away from the player and we wouldn't want to do that. We really want the player to make that choice. So the other side of it is, we deal with some of the harder monsters, like bosses and rares and champions, they don't just drop them like that. They would drop health globes at percentages of their health. Rares in particular are almost guaranteed to drop about every 25%. The other thing we did, because we design everything for cooperative play, if you pick up a health globe and you have a friend nearby, you both get the benefit. So that's something we did to make sure the system didn't favor people who are running forward, melee classes, who used to pull up all the health potions. Now they're actually helping the people in the back.

The function of potions was seen most clearly by players at various public demos of Diablo 3.

In the BlizzCon 2008 and 2009 demo builds there were no NPCs selling potions (or anything else). Healing potions could be found in the demo, but they were fairly rare. Each healing potion granted a set amount of life (40 for a Barbarian at level 8, who had about 150 total life), and filled that much health instantly, as rejuvenation potions do in Diablo II. There was a considerable cooldown time after drinking a potion (before another one could be consumed). In the 2009 demo, this cooldown was around 8 seconds.

At this point there were not yet health globes in the game, so players had to conserve their life with strategic play or use equipment to add life steal, life on hit, or regeneration.

Health potion function remained substantially the same in the Blizzcon 2010 PvE demo. There were no potions available in the PvP Arena demo, which spurred much player speculation as to whether health potions would be disabled during Arena combat. That remains an open question, as the PvP Arena was never added to Diablo 3, and it remains a pending/future feature even after the launch of Reaper of Souls.

Prior to Diablo 3 version 2 streamlining the system, there were multiple levels of health potions, all with level requirements. Players continually found higher levels of potions as they leveled up, which brought an amusing (except for Hardcore) problem. It was not uncommon for players to sell off their stack of lower level potions, forget to set their stack of the next level up to their hotkey, and then get no healing when they stabbed the button in an emergency.

In addition to health and mana potions, early versions of Diablo 3 had other potions that provided short term buffs.

Players have asked how potions will be handled in PvP play in Diablo III. This question is not one the D3 Team have answered yet. There were no healing potions in the Blizzcon 2010 PvP demo, but this might not indicate a design decision for the final game.

Jay Wilson did talk about healing potions in conceptual terms, during a BlizzCon 2008 Q&A session.[2]

Jay said that potions could not be used that often in D3 PvP, and that there would be some sort of cool down timer on them, as there is in World of Warcraft. They will be useful, but their benefit isn't that large, and they can't be chugged endlessly, as they were in Diablo II. The utility of potions is not designed to be that great, which should help keep them from becoming overly-valuable in PvM or PvP play. Jay thinks that the (relative) absence of potions in Diablo III will improve the PvP play, since potions in D2 essentially gave players infinite health and mana. This turned unregulated duels into little more than potion drinking contests, where the player with more of them usually won.

There were various types of elixirs seen early in Diablo 3's development. In the deme at Blizzcon 2008 players saw Strength and Dexterity elixirs that each granted substantial bonus for 300 seconds. These elixirs had been removed from the game by Blizzcon 2010 and have not been seen since.

See the Potions page in the Diablo II wiki for full details on potion use in Diablo II.