Forgotten Soul is a crafting material obtained by salvaging legendary items of any level. Souls can also be dropped directly by Rift Guardians and various types of Treasure Goblins.

Souls are a required material for many crafting recipes with the Blacksmith and the Cube, and are required for many Mystic enchants as well. As such, Souls are one of the main bottlenecks players must overcome in their quest to obtain and upgrade equipment. Players seeking more Souls should push into higher difficulty levels, since legendary drop rates are higher and Goblins will drop more booty as well.

Brimstones (and also the white/blue/yellow materials for level 1-60) were eliminated when the crafting system was overhauled and streamlined in Patch 2.3. That patch and Patch 2.4 also greatly boosted the drop rates for Forgotten Souls, enabling them to fall directly from Treasure Goblins, as well as boosting the overall drop rate for legendary items, which can be salvaged into Forgotten Souls. 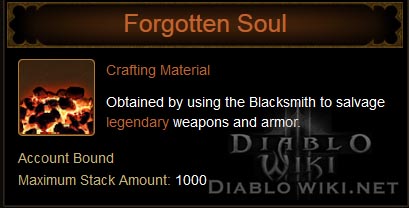