ADVERTISEMENT
From Diablo Wiki
(Redirected from Gift of Ramaladni)
Jump to: navigation, search 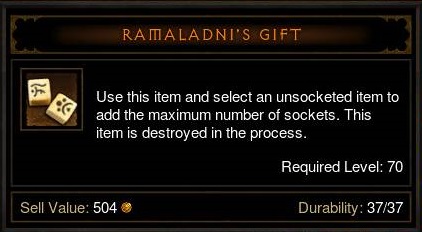 Ramalandi's Gift (or RG, or Rama's) is a consumable added to Diablo 3 and Reaper of Souls in Patch 2.1. This object looks like a legendary material when dropped by monsters, and using it up allows a character to add a socket to a weapon, providing the weapon does not already have one. (Weapons found with a socket can have it enchanted away, then replaced by the RG.)

This item is Blizzard's effort to address the long-standing "weapons are useless without sockets" issue. Ramalandi's Gift effectively adds a socket as the 5th primary affix to a weapon, much like enchanting without having to change/sacrifice one of the initial primary affixes.

There are rules, of course:[1]

Prior to Ramaladni's Gift being added to the game, weapon sockets were considered all-but mandatory, and thus weapons without a socket were unused by well-geared characters. For those players, not only did a weapon have to have a socket, but also a good DPS roll and +mainstat as well. Thus a weapon could roll with two of the three and be useful after an enchant, but a weapon that didn't roll with either mainstat or a socket was generally considered worthless. Ramaladni's Gift makes this easier to surmount.

Since the RG can only add a socket, players who find a weapon with a socket will usually enchant that socket into some other beneficial primary affix, and then add a socket via the Ramaladni's Gift.

There have been many requests from fans to make the RG work on other item slots, but so far it remains only usable on weapons. The RG would be of great benefit to use on jewelery, since Patch 2.1 introduced Legendary Gems which can only be socketed in rings and amulets; item slots where sockets were formerly considered undesirable. 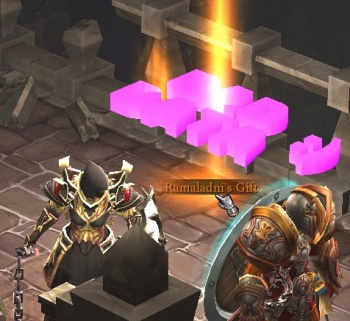 Fans learned of the Ramaladni's Gift via datamining before it was officially announced, and Blizzard replied to questions about the item once it was public.[2][3]

[blue]Here's how Ramalandi's Gift is currently intended to work. This is all with the caveat that it's still under development, and potentially subject to change:

I realize the above may be somewhat confusing, so please let me know if you have any additional questions about this item's functionality.

Also, the item is not yet fully implemented, which means it can't be looted right now (even though it's dropping on the PTR). We're aware of that issue, but we don't have an ETA to share at the moment on when we expect it to be 100% functional.

Some of you have been wondering if you'll be able to re-roll the gifted socket from Ramalandi's Gift, and that's a good question. I dug around to find out, and the answer is that the socket this Legendary consumable provides to a weapon is not eligible for Enchanting.

Of course, this is still under development, though, so there's a chance that it will change before all is said and done.

Further clarification noted that it was not a Seasonal Legendary and would drop for all types of characters once Patch 2.1 went live.[4]

Ramaladni’s Gift is not a Seasonal Legendary item and will be available in all games modes (Normal, Hardcore, and Seasonal) once patch 2.1.0 goes live.

Many players found this item on the PTR before it was enabled. It dropped like a legendary material or recipe, but could not be picked up and bore the bright pink "Bad Data" icon that NYI objects often get.