Gear sets (or Armor Sets) is a term the Diablo 3 developers use to refer to different tiers of armor found in the game. Unlike Diablo 2's armor, which repeated the same graphics three times for the Normal, Exceptional, and Elite tiers of equipment, Diablo 3 has 16 different tiers which character work through as they advance in levels, and none of which repeat. (Reaper of Souls added two more tiers at the top end.)

Gear Sets are not Item Sets, which are multiple legendary items (usually all from the same tier of Armor Set) that grant special bonuses when a character wears them all at once. Gear/Armor sets are distinguished chiefly by their graphic, and by their stats; higher tiers of armor have more Defense, higher tiers of weapons have more damage, etc. There's also a correlation between the possible stats on an item and the item's tier, as affix bonuses increase with higher levels. Level 10 monsters drop items of a low item tier, with low stat bonuses, while level 30 monsters drop much higher, and so on.

The switch from four difficulty levels to scaling difficulty made in D3v2 had no effect upon Gear Sets. Items were always dropped depending on the level of the monster dropping them, and those figures were largely unchanged between D3v and D3v2.

Small images showing each class in each tier of armor found in Diablo 3 classic. (Reaper of Souls adds two more tiers at the high end, plus hundreds of legendary items with unique graphics.)

During development, the Diablo III team stated their desire to avoid the mismatched, "clown suit" armor most characters wound up wearing in Diablo 2. This was caused in Diablo 2 by a lack of uniform upgrade tiers, and by the Exceptional and Elite level of items reusing all the same graphics twice more, with a generally flat quality level on Elite gear. Thus elite leather armor was comparable in quality to elite plate mail, while that was very much not the case at the normal or Exceptional quality levels. Thus characters wound up very mismatched and wearing something like split mail chest armor and a leather cap with heavy plate mail chest and shield.

Diablo 3 is not repeating the Exceptional/Elite tiers of armor, so characters will generally wear gear of roughly the same tier, and by the end game, almost all max level characters are in items of just the highest 2 or 3 tiers. The scaling difficulty/gear and legendary item system in Diablo 3 and Reaper of Souls reinforces this, since items from say, tier 14 or 15 will have much lower stats than items from tier 17 and 18, thus players will almost alwyas upgrade their lower level gear and assume a more unified Armor tier in their eventual costumes.

In Diablo III, the image seen in the Paper Doll is exactly as the item appears on the character in-game.

All classes have their own look for all armor as well, so each tier of gear has a unique appearance by class and there are gender differences as well on some items, such as chest armor. (Because boobies.) 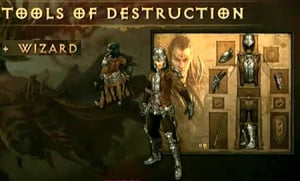 The height of Gear Sets promotion and attention came years before Diablo 3's release. For instance, Blizzard previewed six gear sets, two each for the Barbarian, Witch Doctor, and Wizard in the weeks leading up to Blizzcon 2010. Fans loved the visuals, and many of the item looks set off passionate debates amongst the fansite community.

A summary, taken from the minute-by-minute coverage on Diablo.IncGamers.com:

More Gear sets were shown off during the Crafting Sanctuary Panel at Blizzcon 2010. These images are compilations, showing several different gear sets in one large image for easier viewing.

There were three sets shown on the male Barbarian, with his animal-themed armors getting top billing.

The male Witch Doctor's sets made a stir by how exotic their designs were. The lower right set in this 2x2 image is his most famous set, one fans are calling the tentacle gear set. The black limb-like things along the outside of the shoulders and helm wave around, in constant motion. The effect doesn't translate well to a still image, sadly. 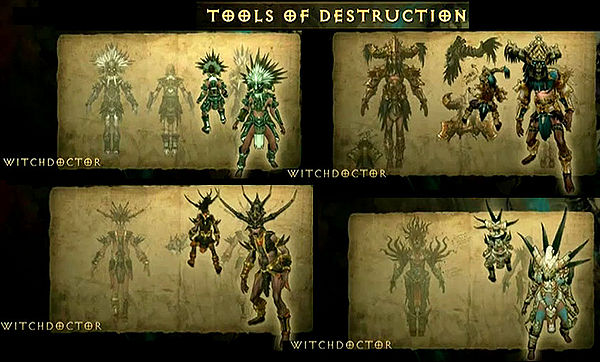 Witch Doctor gear sets shown off during a Blizzcon 2010 panel. He does have some big hats.

These sets were introduce during a presentation at GamesCom 2011, with accompanied chat about the Inferno difficulty. The last set of items in each picture is found in Inferno or otherwise found in late-game hell difficulty.

In an unexpected turn of events, perhaps based upon fan-feedback, the Wizard's notorious starfish hat, and his shoulder pads were revealed to have been changed over the course of development, showing that Blizzard does indeed listen to its fans. 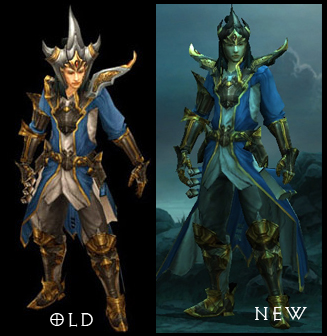 Who lives in a pineapple under the sea? Not this guy.

The term was not used by the Diablo II developers, but they clearly structured the armor in that game into gear sets as well, of a sort. They weren't like the Diablo III gear sets, since there are very uneven amounts of different item types in Diablo II (many more types of helms or body armor than gloves or boots, for instance), and they don't line up to create matching outfits. Armor items in Diablo II look different on each class, but not as different or stylized as the do in Diablo III.

Still, it can be useful to compare the D2 characters, as seen in the 3D models below, before it was converted and compressed into the tiny 2D sprites that are seen while playing the game.

These images were posted in opposition/comparison to the first few Diablo III gear sets, in October 2010. See the original news post on Diii.net for the full debate and lengthy fan discussions.