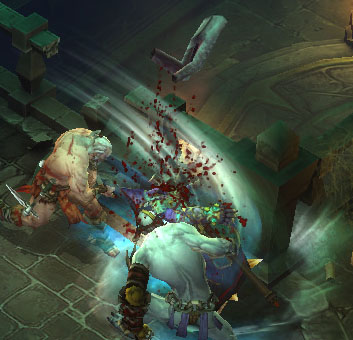 Destructible is a term the parts of the environment that can be destroyed by spells or other attacks by player characters. These include things like tables, chairs, doorways, and stair railings.

There are two basic types of destructibles in Diablo III.

Use of Destructibles[edit | edit source]

These objects can be blasted to try to find gold or items hidden in them, or just for fun. More interesting are the various booby traps found in the dungeons; walls propped up on wooden supports, chandeliers connected to fraying ropes, or other such accidents waiting to happen. When these types of environmental objects are broken, intentionally or accidentally, they will crash to the ground, dealing damage to anything they land on.

Destructibles are very common; there are things to be broken in every room in the subterranean dungeons, though most of these are just decorative objects like chairs and tables. The larger, trap-like destructibles aren't as common and those are not always easy to see in advance, when they can best be used to damage enemies. It's not clear how fully destructibles will be integrated into outdoor environments; none are seen in the outdoor scenes from the WWI 2008 Paris gameplay movie (June), though the grass underfoot is burned and crushed by various spells.

Destructibles can damage your character as well as the monsters; in testing on the BlizzCon 2008 demo build (October) players who knocked over a wall on their own heads were damaged and stunned, while the nearby skeletons were killed outright.

The design and implementation of destructibles were discussed in the D3 Lore and Environmental Art Panel from the WWI 2008 in Paris (June). The following quote comes from a rough transcript of that event:

"Big thing we wanted to bring into environments of D3. Make them feel more alive. Destructibles! How we use environment with selective destruction to your advantage. Use it to kill monsters with collapsing walls, or just for bonus fun visuals. Ultimately, how much breakable stuff we include comes down to fun. There's no scientific formula; it's just very cool to break stuff. That's what we go after; how much before it become overwhelming? Lot of it, lot of fun to go around stomping stuff."

"Only specific interactive objects will actually damage enemies. The falling wall, detachable chandeliers (AND MORE!). They’re specific ‘trap’ items that you can lure enemies toward and then spring on them. The little bits of physics objects that bust apart from destructables don’t cause damage. You’re in charge of doing damage - not seeing how much debris you can fling at a monster."

Jay Wilson commented on destructibles in a press conference from BlizzCon 2008. During that session Jay was asked about fan reactions to the game, and he listed two things fans were really excited about; Wall of Zombies and environmental destructibles. Jay added that one of the reasons Blizzard liked to show their games so early was that it let the design team fine tune and tailor things by the fan reactions -- a response that makes the addition of more and better destructibles seem inevitable. Of course, they choose the most intelligent fan reactions to make changes; In the art controversy, they didn't put much attention to fans screaming for less colour, but they did promise a slower fade-out time of monsters.

Jay spoke about this again in an interview from Blizzcon, admitting that the positive reaction of fans influences the artists to go a bit overboard in adding too any destructibles. [1]

When we did the game introduction [WWI 2008 gameplay movie] we had this collapsible wall that killed a bunch of zombies. For us it was just a minor feature, a cool little thing we put in there, but the fan feedback was very positive. We’d been putting in all sorts of things like that; wherever anything could fall down and looked dangerous, we tried to make that a function and it could fall and hurt things. We were a bit surprised though, by how strong the fan reaction was to the destructibles, though.

So after that, we went into the game and put in a whole bunch of objects to destroy and crush monsters. More collapsible walls and barrels that roll out and hurt things, and chandeliers that fall on stuff. Anything that looked like it could fall and hurt the enemy. What we found though, was that it wasn’t that cool. A lot of it was just kind of distracting and clunky and hard to use. It wasn’t that fun. On some of the levels with destructible we increased the them by like a factor of twenty, which just made them super not fun. I’ve been like, hitting the designers with sticks for six months now to get them to pull those back a bit.

That kind of stuff probably wont have a huge impact on the game strategy. It’s generally a lot more awkward to use a destructible to kill something. And it’s generally more fun to just flat out kill it with your own characters. Occasionally it will be there, it’s fun to hit a wall and see it fall down, but we’re being very careful not to force it.<\blue>

Jay Wilson talked about the rules of in-game [[physics]] that govern the behavior of destructibles in an interview from Blizzcon 2010: [http://diablo.incgamers.com/blog/comments/blizzcon-2010-interview-jay-wilson-diablo-esp/]

Destructible is in some way involved in the following achievement(s).

Destructibles are hard to capture or discern in still screenshots. They are best seen in motion, and demonstrations of them virtually fill the various Diablo III gameplay movies. Check out this brief YouTube clip of a few destructible highlights, for example: