Wood Wraiths are entities that have taken the appearance of trees to prey on living entities in the physical realm.

They look like normal trees until you approach and then they break over and make their way towards you. They are slow but they offload pods which explode emitting a poison gas which you end up standing in if you are toe to toe. They rarely attack in more than a couple at a time, but mostly it's one.

It should be noted that wood wraiths are immune to damage while in their 'non-targetable' state, and their true identity can be revealed by using a ranged attack on them. If they are in actuality a wood wraith, "Immune" will appear instead of a damage number (assuming that the 'show damage numbers' option is activated). If they are simply a tree, it will show nothing, as you are attacking the environment as opposed to a separate entity. 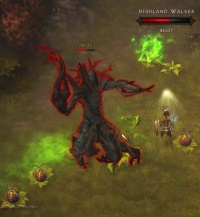 Superunique versions of Wood Wraith have a chance of spawning in the following areas:

The Festering Woods derives its name from the fact that everything in it seethes and roils with evil intent: even the ground itself has been known to rise up and devour a person. The Gnarled Walkers are vile mystical creatures from another realm who can only sustain their existence in our world by sapping life energy from men or animals. These heinous beings have shifted their appearance to that of trees, thereby luring their prey close so as to consume it whole and enrich their reserves of dark power. These beastly things move ponderously, and some are known to exude a foul stench that poisons their victims. Master DeSoto is certain the origin of the walkers, and of the Festering Wood itself, can be traced to the foul doings of Necromancers, who he claims are responsible for much of the evil that has befallen our world, but this opinion might not be related to reality, as he also blames Necromancers for "the whole Diablo incident".[1]

I have heard the most ridiculous tales about travelers being ambushed by vicious trees! (laughs) It is too much. Despite their names, the wood wraiths are not plants, but fully mobile beasts who have taken on the guise of foliage to ensnare their prey. Only a simpleton could be fooled by such a trick. -- Abd al-Hazir