The classifications of monsters in Diablo III are:

For a full list of Undead monsters, check out the Undead Category. You can also go to the Diablo 2 Wiki to the find Diablo 2 Undead.

The Undead classification is for several types of corpse or skeleton reanimation. A Witch Doctor or Necromancer is capable of summoning undead monsters to help in battle without touching demonic magic, but the term mostly refers to enemies of the player. The undead monsters vary greatly in appearance and intelligence.

The demonic undead belong to the realm of influence of Mephisto, who specializes in perverting the dead into macabre creations of undeath.

A Skeleton.
A lot of undead comes in the shape of a skeleton, or a skeletal construct. As necromantic magic works, reanimated skeletons don't have to be made up of pieces from one single old skeleton, but can be made from pieces from a number of corpses. As Abd al-Hazir says in his entry on the Skeletal Undead, it's up to the Necromancer or mage that reanimates a skeleton and how much energy he infuses it with, and the intelligence and power of the skeleton varies greatly. Some are nothing more than a brainless shell, attacking with limbs or simple tools, while others have enough intellect to use more complex tools like bows, and powerful ones can cast spells and even summon additional skeletons themselves, making a skeletal army potentially very powerful.

There are also truly powerful skeletal undead, like King Leoric, which is infused by the power of his tormented soul in addition to dark magic. 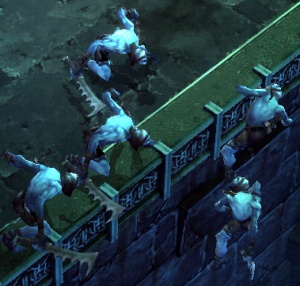 Lots of Ghouls.
There is a great assortment of undead creatures. Some are restless spirits trapped in their bodies, and others are animated by Witch Doctors, Necromancers, mages or demons. In some cases, several different corpses are built together to serve some other perverse use for the hordes of Hell. An example of this is the Grotesque.

Ghouls are some sort of reanimated corpse but nothing like slow shambling zombies; the ghouls are fast and uncanny, running hunched over in a bestial, almost quadrupedal style. They climb quickly and leap out at the player from all angles, seen scaling a huge wall to get into the action. They seem somewhat intelligent in that they can also wield weapons, such as swords.

A Zombie.
Zombies can be both re-animated corpses straight out of a grave, which require very little magic energy from a Necromancer to give a basic motivation (braaaains...) of destructive power. It's motivation can also be a restless spirit of the former inhabitant of the body, awakening again after death, looking for others to inflict this pain.

Zombies are generally completely void of intelligence, and the wounds they received prior to their death often slows them down, making them dangerous primarily only in large numbers. They are the most basic sort of undead, often thought of as even less troublesome than Skeletons. The one thing they have as an advantage is usually that they can take more physical punishment before they are destroyed, and the force or spirit that drives them is removed/expelled.

Mummies are usually powerful warriors or kings stored in great tombs of the Sanctuary desert tombs, and when reanimated, they will react similar to Zombies. The difference is their power and capabilities of spreading disease easier. No mummy type enemies have been announced for Diablo III yet.

A Grotesque.
"Construct" undead can be made up of both bone and dead flesh. An undead is a "construct" if it is made up of more parts than the average corpse would have. The two known types of undead constructs are the Grotesque and the Unburied. Possibly more will be in the expansion.

A great deal of undead comes in incorporeal forms, such as Wraiths. This type of undead is the ectoplasmic manifestation of a soul that chose to stay in the mortal realm after losing its normal life, a spirit that has been forced to stay through magic, or perhaps pulled in to the mortal realm from the spirit world. Depending on the type, they usually require weapons of magical nature to damage, and they are experts in draining speed, energy or life from anyone that would have a close encounter with them.

Leoric
Most general types of undead never reach a point where they are truly sentient, and even then, they are usually slaves to some sort of master that resurrected them. However, if enough dark magical power is infused in a corpse, skeleton or a skeletal construct, they can attain sentience, and even outdo their former master. Even rarer, a huge amount of energy, such as the falling of an angel, can cause undead to rise with their own properties and even carry on what they did in life. Examples of this is classically Liches or Vampires, who often in turn raise lower undead as servants and guards.

King Leoric is the most well known undead monster in Diablo 3.