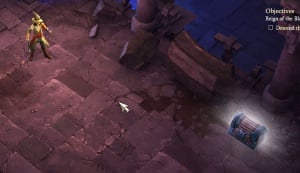 Chests have a white glow to draw the eye in dark dungeons.

Chests in the Diablo games are clickable objects that will usually drop gold, items or other forms of loot when players click to open them.

In Diablo III chests are either the normal, white-glowing type, or special, rare, resplendent chests that have a golden glow and drop numerous items. There are no locked chests in Diablo III.

In addition to chests, there are numerous other clickable objects that may drop loot, including things like bookshelves, armor racks, weapon racks, dead bodies, tree stumps, loose floor tiles, and many others.

Chests, barrels, dead bodies, and many other "clickable" type of objects are found throughout the dungeons and surface areas of Diablo III. These objects and containers function much as they did in the previous games in the series; once a player spots the object he or she points at it, and with a click the character proceeds to the object and opens it up.

While there are no locked chests in Diablo III, there are trapped objects in Diablo III that may trigger explosions or other scenarios. These are often resplendent chests that will provide considerable rewards for opening, after the event is defeated. 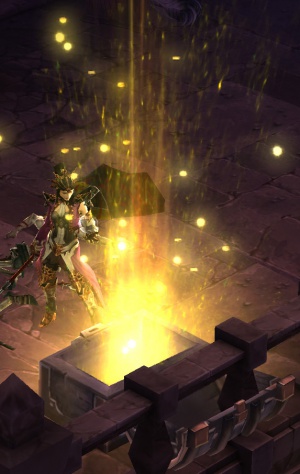 While fans reported fairly low numbers of chests and other clickable items in the Blizzcon 2008 and Blizzcon 2009 demos, this was likely due to the early development state of the game.

As of the beta testj, chests are fairly uncommon, with resplendent chests very rare, but other sorts of clickable objects abound throughout the surface areas and dungeon levels. These include a huge variety of clickables, including weapon and armor racks, dead bodies of many types (including monster skeletons), loose floor tiles, lecterns, bookcases, urns and pots, tree stumps, hollow logs, and many more.

Some chests require multiple steps to reach them; clicking on platforms and hidden levers was required to access some chests in the Act Two desert areas seen in the BlizzCon 2009 demo.

Other chests are part of traps and events. One seen in the 2009 demo was The Collapsing Tomb event. This quest was set entirely in a tomb that was simply choked full of chests. The catch was that players had to resist the urge to keep grabbing treasure and explore the dungeon to find the exit, before the entire dungeon collapsed after 300 seconds, killing any characters who remained within.

One feature from Diablo 2 that will not be returning in Diablo 3 is the locked chest. Bashiok explained why in September 2008. [1]

There have been a few discussions about chests, what they meant in the previous game, and what they'll mean in Diablo III. Currently there are no locked chests, and it's not something we're looking to reintroduce for now. We have discussed varying chest quality and types, adding randomness not only to the appearance of a chest but also the value of items it may drop or possibly specifically what types of items it's guaranteed to drop. Mix it up a bit and make finding a chest exciting, but make finding a special chest something even rarer and more exciting. It could certainly make exploring the entire floor of a dungeon more compelling before moving on.

Players often complained about the locked chests in Diablo II, since they didn't necessarily drop any more or better stuff, and having to carry keys was thus a nuisance without much redeeming value. The D3 Team seems to be removing this argument before it can even begin. 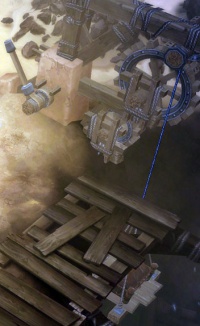 Having keys that are dropped for specific uses, that have more story and questing elements tied to them are definitely possible. In a general 'designery' way Leoric's crown was essentially a key used to unlock the boss fight in the BlizzCon demo. So I don't think it's out of the question to then have a literal key be used for more quest-centric chest unlocking purposes.

That's of course completely separate from the generic dropped keys and their ability to open randomly spawned 'locked' chests. We don't currently have keys and locked chests, but... we're not completely opposed to them either.

Something I posted about a long time ago, which were just ideas being thrown around internally, is the idea of having multiple tiers of chests with subsequently lower spawn rates, and subsequently increased chances for dropping better and better items. At that point keys sort of become this unnecessary burden, because you already had the amazing luck of having the rarest chest type in the game spawn, it's probably not all that cool to then also say "Now find a key for it!"