Queen Araneae is a superunique Boss Spider that appears in the Caverns of Araneae near Wortham in Act I. She is one of the objectives of the Trailing the Coven quest.

The fight with Queen Araneae is very straight-forward. She only has a small handful of abilities to choose from, moves and attacks slowly, and will retreat periodically during the battle to have the hero battle her minions.

Once you are in her chamber the entrance back to the Caverns of Araneae is closed off to you as is the way past the lady in the web. 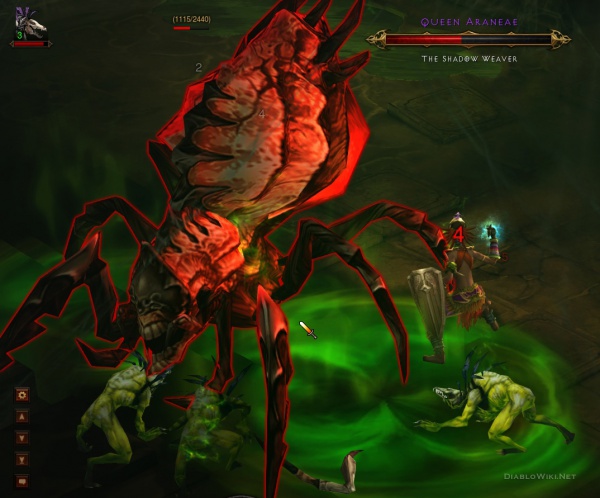 Araneae's story is explored solely through lore books and journals that are dropped within the spider caves. Her narrative and exposition revolve around manipulation from Leoric and Lazarus during Leoric's reign of madness.

From the ramblings of Deckard Cain:

Rumor has it that Lazarus loosed a silent terror in the caves near Leoric's Manor before he died. He labored for weeks under a group of unusually large spiders, and many of his servants quietly disappeared during this time...The largest creature lead the others into the caves. None who have ventured there have returned.

Chancellor Eamon, It is of the utmost importance that we secure my manor from the traitorous rabble in Tristram. The caves to the east are too close to my land! They must be blocked—completely obstructed. I believe the archbishop Lazarus has magically bound some arachnids of late. They may serve us well...

Royal Guard, With great pain, I must admit that our king is no longer able to separate reason from madness. He orders the caverns to be filled with the archbishop's monstrous creations and will hear nothing else. Perhaps the legendary ancients themselves once dwelled there... but now we must desecrate their ruins.