Ghouls are swift and dexterous "cannon fodder" monsters that swarm players. Easy to kill one at a time, harder in greater numbers. Ghouls are undead monsters.

Ghouls might be undead, but are nothing like slow shambling zombies; the Ghouls are fast and uncanny, running hunched over in a bestial, almost quadrupedal style. They climb quickly and leap out at the player from all angles.

The primary advice to stay alive against Ghouls seems to just be avoid being swarmed from all directions, and use skills like the Barbarian Berserker skill Leap Attack or the Wizard spell Arcane Teleport (preferably with a Striking Rune) or the Witch Doctor spells Horrify or Mass Confusion. 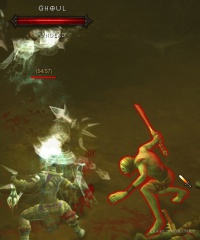 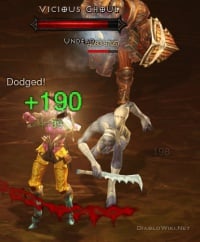 Superunique versions of Ghoul have a chance of spawning in the following areas:

Ghouls are stronger than most risen dead, but they gain their fortitude through horrific means -- feasting upon human corpses. These creatures are least dangerous while eating, but do not disturb them or it shall be your limbs between their teeth. -- Deckard Cain