Exorcists are a corrupted human type of demon monster added in the Reaper of Souls expansion pack. These enemies are found only in Act Five, as well as randomly in Nephalem Rifts. They are classified as Reapers.

These appear to be melee fighters, akin to the Cultist Berserkers found in Acts One and Two, with their huge muscular arms and massive claws serving them as well as any sword.

“All know the reputation of the exorcists of Westmarch, those spiritual warriors specialized in removing demonic possession. By custom, they arrive in darkness, clad in cloaks as black as the night that conjured them. They work in secret, extracting the demons that dwell within their subjects. Now Malthael has turned them, and they roam the city in their inhuman forms, stripping the souls from all they encounter.”

These were once men, mutated into demonic forms by Malthael's vile sauce. 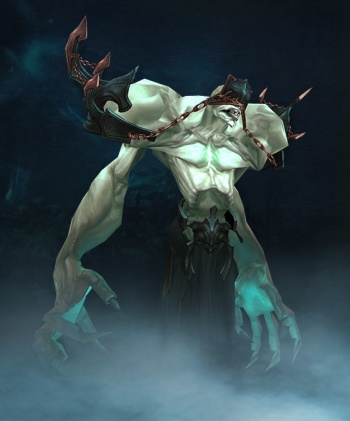 These superunique Exorcists can appear in the following areas: