Shielding is a Boss Modifier that may appear on Champions or Elites in Diablo III.

Shielding causes a shielding bubble to appear around the Champion, boss, or boss' minion for a few seconds, every few seconds. The shield grants immunity to all forms of damage and reduces or deflects many CC effects as well, for the duration of its presence. Monsters can not be hurt in any way while shielded, though they can still be slowed by some rooting effects. (Ones that have a general area of effect like Caltrops, but not specifically targeted ones like Entangling Shot.) 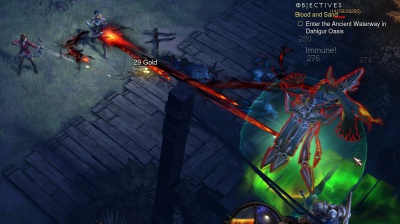 Shielding is identical in function to the (removed) Invulnerable Minions effect, except that one only appeared on boss minions, and was permanent. Shielding pops in and out on Bosses and Champions, turning on for a few seconds, then vanishing again without warning or any set on/off time.

Magda has a shielding-like property, and her shield provides her with limited invulnerability, but the on/off timer for the shield is based on events during her battle, rather than triggering on a semi-random timer.

Shielding monsters will no longer shield if they are the last monster left in the area, and only one monster in a given pack can be shielded at a time.

Shielded monsters can not be damaged, so players should learn to recognize the effect and not waste time attacking a monster while it's invulnerable. As is often the case, this modifier is more dangerous when found on Champions, since all of them have it. Bosses and their minions get shielding, but it seems to be less frequent, especially on the minions.

Slowing effects that rely on hitting the enemy, such as Entangling Shot, or stunning attacks like Seismic Slam are generally ineffective against shielded enemies. Area effects like Caltrops may still work though, so adjust your tactics accordingly.

Mercifully, Shielding can not pair with Invulnerable Minions (since removed) on the same boss and his pack.

Shielding can be most dangerous to characters who survive by drawing constant health via Life Leech or Life on Hit, since the shielded monster takes no damage and thus yields no leech or LoH. Players thus need to be sure they're not targeting the shielded monster and gaining no health from their hits.

The Shielding bubble has a greenish-tint and is instantly recognizable when in effect on a monster. Boss minions will also gain a shield at times, and their tooltip shows "Shielding Minion" whether the shield is active or not.