These creatures resemble a cross between a dog that's been turned inside out and a crocodile. They are durable and powerful, with a nasty melee slashing attack.

As seen at Blizzcon 2010, these monsters had an upgraded graphic, with a swirl or reddish light connecting them to the Cultist that had summoned them. 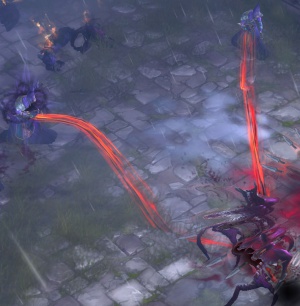 These odd, half-skeletal creatures are summoned from raw, red manhole-like openings in the ground by Dark Cultists. They are quadrupedal, and look a bit like a dog crossed with a crocodile, then turned inside out. They are quick of foot, but appear to possess only melee attacks.

Dark Cultists do have an attack of their own, though whether they can summon creatures more fearsome than these guys is not known.

Not much is known about the summoning of these demons, or even which of the three Prime Evils (if any) it has the strongest allegiance to.

The Dark Demon was one of the monsters of the original lineup at WWI 2008 in Paris and shown in the gameplay video from the event.