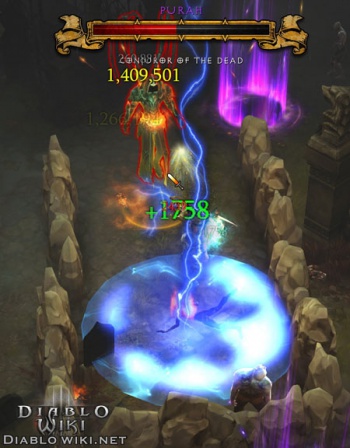 Wormhole and Thunderstorm from a Unique.

Wormhole is an Elite Affix that spawns on random Elites and can be found on some Uniques in Diablo III and Reaper of Souls. It was added to Diablo 3 in Patch 2.0.1, released around the time of Reaper of Souls.[1]

Wormhole creates two pink circles which are linked like Portals. Any character who moves over one will instantly appear at the other, at which point the Wormholes will both vanish. This is not necessarily a bad thing; players can often use a Wormhole to move from the center of the action off to the side. More often this effect is dangerous for ranged attackers in much the same fashion as Vortex, as the Wormhole will move a character from a safe spot into the heart of the action.

Though one end of the Wormhole usually appears directly under a player's feet, it is not operative for the first second or so after it appears. This generally gives alert player time enough to move out of the way, and ranged attackers should almost always be able to avoid falling into a Wormhole.

Wormholes are harder to dodge for melee fighters who may be surrounded by enemies on all sides, but in those cases the ability can be helpful or merely distracting, as an unavoidable Wormhole will move a player out of range, like it or not.