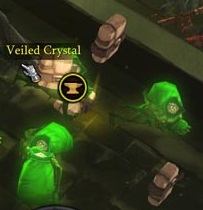 The Odious Collector is a special type of Treasure Goblin added to the game in Patch 2.1.2. These goblins are green in color and they drop crafting materials of white, blue, and yellow quality, as well as legendary item crafting plans. They do not drop legendary materials, or any items or gold.

More than one Odious Collector can spawn at once in large, mixed-type packs, and as of Patch 2.1.2, the amount of clicking required to clean up after them is a leading cause of player requests for an auto-pickup option.

Odious Collectors behave just like other types of Treasure Goblins, standing motionless until a player hits them or moves close enough to activate them. At that point they begin to run and giggle while dropping shards, pausing periodically to open portals. They will escape through a portal if left untouched for too long, escaping death and taking their fountain of materials with them.

Players can let them run around a bit before killing them, but since they seldom drop more than one material at a time when running, it's not a real profitable effort. When they die, Odious Collectors, drop large stacks of materials, which makes for easier clean up.

During early patch 2.1.2 testing on the PTR, Odious Collectors and the other new types of goblins (Gem Hoarders and Blood Thiefs) could spawn in mega-packs up 8-16 goblins, all of the same type. This led to ridiculous amounts of materials dropping, all of which had to be clicked up one stack at a time.

This was helpful to meet material needs, but required an annoying amount of clicking and most fans were happy when all goblin packs were changed to mixed type varieties, so there is very seldom more than 1 or 2 Odious Collectors in the whole pack.

Players who are new to the game or just starting out in a Season may score a great number of legendary crafting plans, orange or green, from these goblins. Since rare and legendary item/gem crafting plans do not drop once a player already knows them, Odious Collectors generally drop only white/blue/yellow materials, and not legendary ones.

Amazing examples of this occurred during PTR testing of Patch 2.1.2, Season Two, when Odious Collectors could still spawn in single-type goblin packs, and a player brand new to Season Two encountered a bunch of them in a confined area. This resulted in over 100 legendary plans dropping, most of them 2 or 3 times each, and made for quite a spectacular visual of beams.