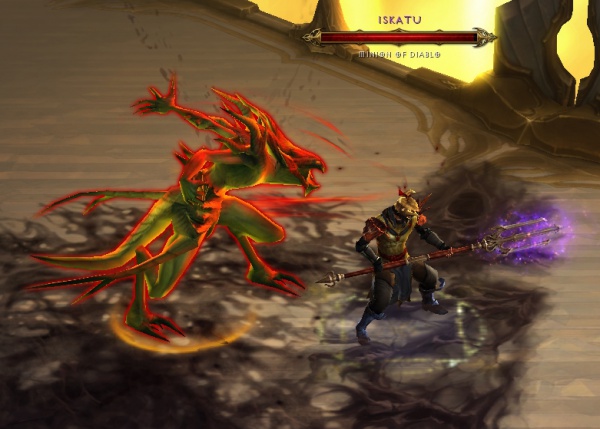 Iskatu, "Minion of Diablo" is a mini-boss that is encountered during the battle for the High Heavens in Act IV.

Iskatu is a Terror Demon, a Diablo-looking demon type that attacks with stealth. As with the others of his kind, Iskatu can vanish and reappear some distance away, or right on top of the player, launching into a fast and damaging melee attack.

This battle is complicated (and eased) by the avalanche of small shadow creatures that constantly appear, flocking towards the heroes. They deal very little damage and are actually helpful to many builds by providing a source of quick easy kills for health and/or resource regeneration. They can get in the way though, making movement difficult for a player who needs to flee Iskatu's damaging attacks.

Like most of the Superunique monsters, Iskatu is considerably upgraded in the Reaper of Souls expansion pack. He has gained the Desecrator ability and casts those damage pools early and often. The battle scene is also graced by falling Meteors that seem to be randomly targeting and will damage the player and/or monsters if they hit them.