Flyers are Demon-type enemies. They are large, bat-like creatures that infest many of the dungeons in Diablo 3, and are quite similar in form and function to the various Winged Fiends and Blood Hawks that were seen in the earlier games in the Diablo series.

Flyers have various enchantments, including the ability to spark and shock players during combat. Not much is yet known about the subtypes or varieties of this monster.

Flyers have only been seen, thus far, in the dungeons of Act One, below Tristram. They are commonly seen in screenshots from those areas, and are always flapping around in random directions, annoying characters with their hit and run AI that returns from earlier games in the series.

The Pit Flyer is seen in concept art, as part of the Pit Flyer Spawner monster, but those have not been seen in the game. The Flyers encountered in Act One do not spawn; they are just flapping around the dungeons loose and ready to fight, like any other monster. 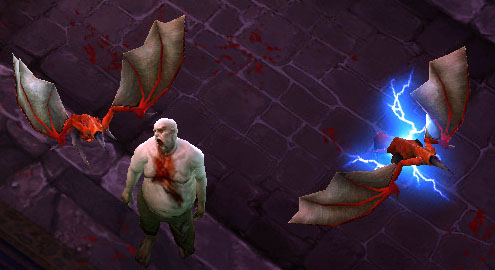 Flyers, with a zombie.

Flyers are seen in various screenshots in the act one dungeons near Trisram.