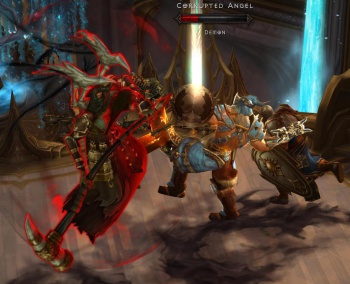 The red color to the globe shield indicates fire resistance.

Corrupted Angels are large, winged, demonic melee fighters armed with huge mauls. They are first encountered in Act Four, and can be seen in parts of Act Five as well, in Reaper of Souls. They may also be found in Nephalem Rifts and Greater Rifts, where the are amongst the most difficulty enemies due to their toughness and movement.

Corrupted Angels are the most famous of the "charged from off screen" enemies in Diablo 3, and are one of the toughest enemies in the game. They will indeed charge from off screen, and worse, they pass through their target rather than stopping there to be dealt with. Players without good ranged attacks find them especially annoying as they charge, hit and cause a wobble/knock back, and then flash off into the distance, often stopping to hover in some inaccessible area off the side of a level in Act Four.

If approached they will generally stand still and engage in melee combat, where they are slow but powerful attackers, using their huge clubs and mauls for powerful strikes.

Corrupted Angels have a unique ability to increase their resistance to the first type of damage they are hit by. Thus if a character has only a single element for all of their attack skills (which is usually the case in RoS to optimize Elemental Damage) then it can take much longer to kill the Corrupted Angels.

The shield graphical effect around the Corrupted Angels changes in hue to demonstrate which type of damage they are resisting, blue for cold, white for lightning, green for poison, etc.

During the Patch 2.1 PTR testing, fans complained that Corrupted Angels were out of line with the overall difficulty and took too long to kill, which was a big deal in the timed runs through Greater Rifts.

Those Corrupted Angels are a joke, they got like 75% dmg reduction and the same health pools as other monster types. If you got a map with alot of elites of this type you got a serious disadvantage.. Anarchs and stuff are annoying but acceptable, corrupted angels should be adjusted for grifts in my opinion.

Grimiku: I’ve encountered a few Elite packs of Corrupted Angels in a Greater Rifts when I’m running solo, and using a build with a single element. When they’re coupled with Health Link or Extra Health, it can make them particularly tough to bring down, and sometimes that’s enough to keep you from advancing. All considered, though, ill-timed Corrupted Angels rarely seems to be the sole reason I fail to advance in a Greater Rift. With that, luck of the draw is kind of a recurring theme in Diablo games; you win some, you lose some, but the important thing is that you keep on killing!

I don’t think there is any harm in talking a bit about it, though. What do you guys think about Corrupted Angels in Greater Rifts? Personally, I think it’s fine the way it is, even if it can be a little frustrating now and then.