Mortar is a Boss Modifier that spawns on Bosses and Champions in Diablo III. Mortar enemies emit a steady stream of high-arcing bombs, which auto-target any hero outside of melee range. The modifier is meant to be tough for ranged attackers, as a counter to all of the boss modifiers that are much more dangerous at melee range. There is a "dead zone" close to Mortar bosses that no bombs (are supposed to) fall in, thus making them safer in close... safer from the mortars, at least. 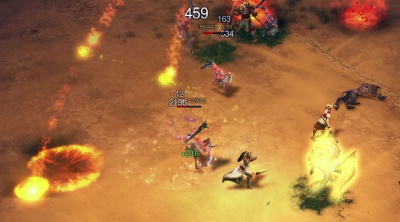 Ranged attackers need to learn to move after every shot, (if not more often) since Mortars are launched at the current location of the hero, and standing still is a sure way to get blasted by these projectiles.

The property shares to the Boss' minions, but which one is firing the mortars seems to alternate, so very seldom will a boss and minion be Mortaring at the same time. This is not true of Champions, where multiple incoming mortars from different Champions is not an uncommon sight.

Mortar is one of the most divisive monster affixes in the game. It's largely irrelevant to melee attackers, since the "dead zone" around the monster spewing the mortars is large enough that anyone within melee range won't be hit by any of the explosions. That's the theory, anyway. There have been bugs with the affix shooting straight up at times and hitting heroes even in the dead zone, especially when the monsters were in a corner or blocked by something, such as Waller walls.

Even melee fighters can have problems with Mortar Champion packs, since if the enemies are spread out, the dead zone for one might be too far from the others and still be in their firing range. 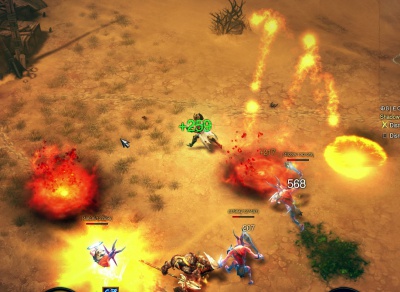 The real challenge of Mortar is for ranged attackers though, since the mortars directly target heroes who are not at close range. This can be defeated by moving in closer, and if a hero has enough hit points or defense to take a hit or two at close range, it can be better to stand right beside the boss and blast him with your best offensive attack. Many enemies, short of Inferno at least, deal more damage with the mortars than with their melee attack, especially if it's a weak monster type.

When you must stand at a distance though, it's all about having quick feet. Players must learn to move after every shot, and sometimes even more often than that, if there are Champions and multiple sources of mortar fire. Skills that auto-target or cover an AoE are very useful against Mortars, so you can cast one and keep running while the spell does damage and you avoid the mortars.

It's best to keep Mortar enemies above you on the screen or to the sides. Due to how Diablo III's isometric view works, you see less of the screen below your character than above, and have less time and distance to avoid incoming projectiles like Mortars. When in combat, try to sidestep and run in circles, rather than just in a straight line away from the enemies. This will keep the battle in one area and you can time your movements better when the monsters firing them are visible, plus it will let your AoE attacks hit multiple of the enemies at once.

Stuns and roots and other CC attacks are helpful, but not a panacea since the Mortars will keep emerging as long as the monster is alive, whether it's stunned or not.

Mortar was tweaked in Patch 1.0.3. That patch increased the maximum range for their projectiles, but doubled the size of the dead zone of safety in close. 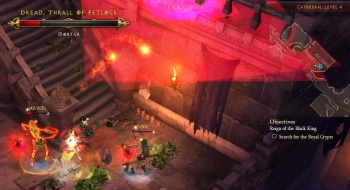 Mortar and the pink polygons of doom.

When Mortar was first enabled during the Diablo III Beta test there was an awesome display bug where the game showed huge pink squares instead of the proper explosion graphic for the mortars. The effect was the same, and this visual bug was fixed in a later patch, but it was fun to see while it lasted. Video example here.

At that point Mortar had no "dead zone" and would hit melee attackers, plus the targeting was random and even ranged attackers could stand and fire with little risk of one of the bombs happening to fly straight at them. Obviously, changes were made during development, not the least of which was raising the monster level required, so that Mortar isn't even available until Nightmare, in the final game.

Mortar is best appreciated in action, since the arc of the bombs and the movement patterns of the character are what make these fights entertaining.