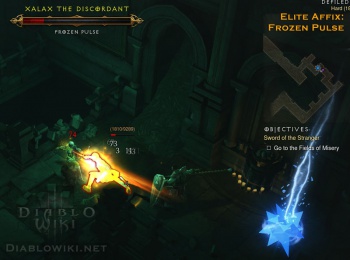 Frozen Pulse is an Elite Affix that spawns on Random Elites and some Uniques in Diablo III Reaper of Souls.[1]

This effect creates a small spiky blue ball which looks similar to a Frozen bomb. Unlike Frozen, the Frozen Pulse seeks after targets, moving quickly to lock into place directly on top of a target. Once in position, the Frozen Pulse activates, "pulsing" out cold causing damage and a slowing, chilling effect to anything in the (small) radius of effect.

The Frozen Pulse is harmless when it first appears. The damage and chilling only begins once the orb moves to find a target, then stops and starts to pulse. If players move quickly enough, the orb will never get on top of a target to start pulsing. In that case it will simply give up after a few seconds and start pulsing wherever it is.

A more skillful way to deal with Frozen Pulse is to let it reach you, then to move quickly once it locks into place and starts to pulse. The orbs will not move again once they've activate, and they can be easily avoided once they are stationary. 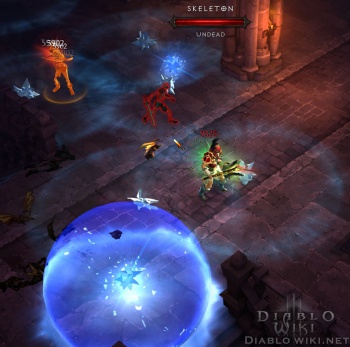 Frozen Pulse and Frozen at once.

The graphics for Frozen Pulse and Frozen look similar when both attacks are in their formative stages, though their behavior is very different.