Are you looking for the Imp (lore)?

The Imp is a small humanoid demon found in the early dungeons of Act I.

These demons were first seen in a screenshot from the beta build, released in July 2011. These monsters are found in the early levels of Act One, and seem to fill much the same role that the Rat Men did in Diablo II; fast moving, small, creepy little ankle-biting demonic humanoids.

They attack in packs, and can be dangerous in large groups, but aren't too tough for most heroes to dispatch, especially when singled out. 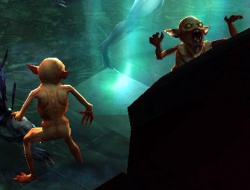 Little is yet known of Imps. They appear to be small, fast-moving swarmers, but they have only been seen in the beta demo build (as Crypt Children sub-types). In those early game levels they are purely melee attackers.

There may well be higher level types of this monster, with shamans and other advanced units.

They have no known spells or special abilities. They do have a delightful little yelp upon death, however.

Demons have been known to devour their own young when no other nourishment is available. Their offspring, the imps, sometimes manage to flee and band together with other demonspawn. They rove in vicious packs, ready to descend upon the unwary traveler and rip his body to shreds with their tiny, needle-sharp teeth.

When some of these bloated abominations are killed, they erupt, releasing three Imps.

There are no Imps in the previous games in the series, but they appear to be quite similar in appearance and function to the Rat Men, who were a subtype of the Flayer monsters, which were found all through the jungles of Act Three. Rat Men were weaker versions of Flayers, given a brownish color to make them harder to see in the dark levels of the Catacombs, which they infested in the later levels of Act One.

Like the Rat Men, Imps are small unarmored humanoids that move quickly and attack in packs. Unlike Rat Men and other types of Flayers, the Crypt Children are not armed with massive butcher knives. Imps are not to be confused with the demon imps of Act 5 of Diablo 2.

In terms of in-game physics, during the beta, it was found with an emulated version of the game that the imp would fly higher and farther than any other monster type in the game, given enough force.

The Imp has appeared in the beta in the various tombs and the Cathedral. The imp has not been featured in any concept art.