Meteor Storm is a Tier 3 skill from the Wizard's Conjuring skill tree, hurling multiple small meteors on enemies for as long as the Wizard chooses.

The Wizard calls down a shower of small meteors to create a living inferno where she directs it. 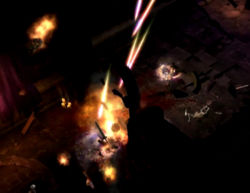 The Meteor skill from D2 has been upgraded and modified. Now it calls down multiple meteors over a wider area, much like the Blizzard spell. Furthermore, Meteor Storm can be cast for as long as the Wizard wishes, with a mana cost per second, rather than per use.

Exactly where the meteors come from is of course unclear, as most places in the Diablo games have some sort of roof...

Spell was first shown at BlizzCon 2008 when the Wizard was unveiled. It was part of the Wizard presentation video.

At BlizzCon 2009, the spell had been changed and renamed to Arcane Torrent, and put in the Arcane Skill Tree.