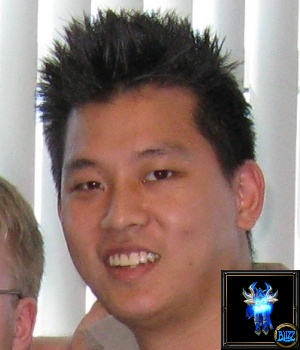 Karune is the handle of the Blizzard Entertainment employee Kevin Yu. He works as a RTS Community Manager and has his main office in Blizzard Irvine. Most pronounced, he is the community spokesperson for StarCraft II, but is also involved with StarCraft and WarCraft III.

Karune's forum avatar
Karune has been in the forefront to befriend all the StarCraft fansites that have existed for several years, and to pump new life back into the RTS community. He and his European collage Xordiah (Stefanie Gwinner) hosted the first RTS Summit at BlizzCon 2007, as well as helping the press at the Blizzard Press Tour March 2008 where the Zerg race was revealed. He often frequents events where StarCraft II or other Blizzard RTS games are showcased or tourneyed.

When not acting in such an active position, he keeps contact with the American community as well as produces StarCraft II Q&A Batches which answers questions from the fans and fansites. Together with the developers he has answered hundreds of fan questions, not counting the regular forum replies on battle.net or the WoW boards.

Kevin's previous experience in this area includes working as a Community Manager at Petroglyph where he was known as "SageKing".

Karune is known as "Karunecm" on the WoW forums' StarCraft board.