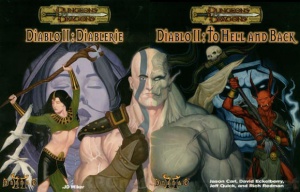 It's obvious they were meant to be used together...

There has been a few traditional pen and paper Role Playing Games made inspired by the Diablo universe as part of the Diablo games. These are set in the Dungeons and Dragons ruleset of different versions and are not conformed to contain canon lore.

There has been no recent upgrade of the P&P variant of the franchise, like there has been for World of WarCraft.

The canonity of these books can be questioned, and we have no answer from Blizzard on the matter. Many Blizzard employees have spent lots of time playing DnD however, and it's likely they got help from Blizzard when making the modules.