Diablo III began development at Blizzard North in 2000, and continued until the studio closed in 2005. An almost entirely new development team took over at Blizzard Irvine in 2005, and the game they created is what we know today and what the rest of this wiki covers.

Few elements of the original Blizzard North version of Diablo III were retained, and no one working at Blizzard has given any details about why the original game was scrapped or which elements were retained in the new version. Even the ex-Blizzard North employees have had little to say on the matter, whether out of professional courtesy, loyalty to old friends at Blizzard, or fear of Blizzard's lawyers.

This is an abbreviated account. See the Diablo 3 History article for related information and more details. 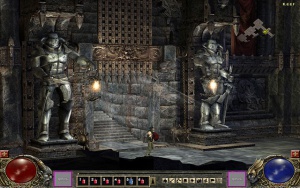 Diablo III began development at Blizzard North in 2000[1], shortly after the completion and release of Diablo II. At that point only a few developers were working on the 3D engine and some early art assets (such as monsters and environments), and development on Diablo III didn't really kick into gear until 2001, after the release of Diablo II: Lord of Destruction, when the bulk of the Diablo II team were available to start working on the sequel.

Development continued steadily until 2003, when financial issues and insecurity about Blizzard's ownership began to disturb the developers. Those issues[2] ultimately led to the departure of the "big four" in mid-2003.[3] Shortly after their departure, numerous other long time employees of Blizzard North followed them out the door.

With such an ongoing talent drain, Blizzard North had to shelve development on their other, never-revealed, non-Diablo title, and concentrate all remaining employees on the (still unannounced) Diablo III. Rick Seis was announced as the Project Lead of the still-secret title, a position he held until mid-2005, when Blizzard North was officially closed down.

Most of the remaining Blizzard North employees left for other studios, when Blizzard North closed. Chiefly Flagship Studios, Castaway Entertainment, and Hyboreal Games, all founded by past Blizzard North/Diablo II developers. A few employees stayed with Blizzard and relocated to Irvine, where they joined the newly-formed Diablo III team and worked on the game, which was restarted nearly from scratch in 2006.

Game designer Max Schaefer revealed this on the Diablo Podcast in April 2011.[4]

MAX SCHAEFER: We wanted to make it a bigger... We actually were going a more MMO route with it. So, it had more players in the game. But, we were very early and it’s the point in a project where you don’t talk to the public about it because so much can change and so much can go on. There’s lots and lots of things that go on at game companies that never hit the light of day, because it’s just too early to really sit and things are subject to change all the time. So, we may have changed our own path radically had we kept going with it. But, at the time our thinking was to go more MMO style with it. With big communities in-game, not just like a session-based -- four-person or eight-person -- or anything like that. But, to really make a big overworld and a giant shared community.

The first big rumor about Diablo III was leaked in mid-2005, and credited to an ex-Blizzard employee (presumably he was fired acrimoniously, given the secrets he took to spilling immediately afterward) named Chris Hartgraves. In a forum post on a World of Warcraft site, he revealed upcoming news about Starcraft II, World of Warcraft, and Diablo III.

Last week they had a thing called "Show N Tell" which they have every 6 months to all the full time employees - Anyways Diablo 3 takes place in heaven. Hell is trying to take it over and it is AWESOME looking ... Imagine the brightness of heaven being taken over by the darkness of hell ... Imagine WoW but in a Diablo world in amount of size and playability ... Also, guild housing is available in this game for those of you who know about it.

Hartgraves' rumor was backed up shortly afterwards by an anonymous email to GamingSteve.com in February 2006. [5] The mailer slightly changed the names of the the games he was talking about for no apparent reason.

It is true that Beelzebub 3 will be done in true 3D and it did indeed look freaking awesome. It is also true that Beelzebub 3 features a story between the conflicts of Heaven and Hell and contains a very cool feature where every single item in the game can change between a "light" version and a "dark" version. However this was also one of the problems with the original version of the game. Other than the ability for any item to visually change from light to dark it didn't affect the actual stats of the item or change the gameplay in any way. So the game has gone through a total rework to inject some "fun" into the gameplay and to make it feel like the Beelzebubs of old.

This "total rework" turned out to be virtually a total restart in 2006, which resulted in a much longer time for development than anyone expected. The game is currently targeted for release in late 2011 at the soonest, more than 6 years after the closure of Blizzard North.

See the coverage on the Diablo III History article for many more details and fuller quotes from these rumors.

Despite the fact that Blizzard North closed down in 2005, the official secrecy about what the developers had been working on lasted until after the 2008 reveal of the new version of Diablo III. Even then, all of the artwork and other game assets were from the new version, dating from 2006 or later.

The first visuals of anything from the Blizzard North version of Diablo III appeared in late 2010, but were not widely-reported until January 2011[6]. They were several images of two monsters from the game, posted on the blog of artist/animator Alan Ackerman.

Alan had worked at Blizzard North for years, before leaving to join Castaway Entertainment in 2003, so his work was clearly from quite early in the project. 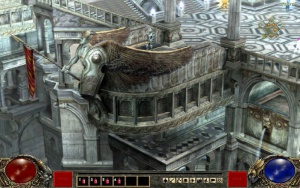 The next images to see the light of day surfaced in February 2011[7], via a post on Kotaku.

There were seventeen screenshots released, most showing gleaming silver and ivory levels of Heaven, where Diablo III had long been rumored[8] to take place. Other screens showed a dungeon area called The Keep. The images were released without any additional information, and there was no hint of when they'd been taken or who had given then to Kotaku.

All seventeen can be seen in the Blizzard North image gallery. A few samples are seen on this page or included in the gallery below.

A public vote run on leading fansite Diii.net shortly after the shots were released found that a slight majority of fans preferred the look of the game in the early screenshots to the current version.

Which D3 art design do you prefer?

Interestingly, those results are from the second vote run on Diii.net, since the results of the first vote had to be tossed out after it was hacked and thousands of duplicate votes were submitted (in favor of the earlier screenshots). The passion of fans was clearly shown by that being the first vote on that site, in the 3 years since Diablo 3's announcement, to ever be cheated in significant numbers.

No other art assets or information has been released. There is hope for much more in the future, though. As time passes the ex-Blizzard North guys are becoming more talkative. Besides the various leaked images, 2011 brought word that writer David Craddock was working on a book about Condor/Blizzard North, and that he'd spoken to numerous ex-Blizzard North employees.[9]

Flux, long-time webmaster of Diabloii.net and now Diii.net has also said that he's engaging in some conversations with ex-Blizzard North employees he's known for years, and that he hopes to contribute a substantial History of Diablo III article at some point later in 2011.