Queen Asylla (db) was the wife of the Mad King Leoric. She was beheaded by the Archbishop Lazarus under the watchful eye of Leoric himself. 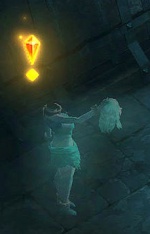 The Diablo III development team likely added her into the game as a full-fledged NPC to not only propel the player forward through the narrative, but to also provide more context into the world of Sanctuary and to enrich the character of Leoric himself, and the (often convoluted) relationship he had with Lazarus and the subjects of his kingdom.

She greets you as you enter The Cursed Hold and tasks you with freeing the spirits of her imprisoned subjects so that they may rest in peace. There is an achievement (Cursed Captives) to be earned if you do this within two minutes.

The next time you come across her you will witness how she came to lose her head.

Queen Asylla is involved in the following Quests, Events and Bounties: 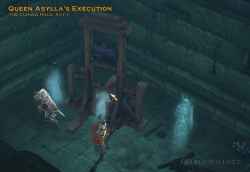 Queen Asylla's execution
Queen Asylla is new to the Diablo franchise. Any scenes with her in the game are based upon the events preceding those of Diablo I, namely the fall of the mad king, the influence of Diablo himself, and the actions of Archbishop Lazarus. Even within the Diablo I manual, which was rich with writing and lore, she isn't mentioned.

Asylla appears in spectral form as a quest-giver NPC brandishing her own head, giving the player her blessing to free the souls of six of her subjects who died under the dark reign of Diablo within the Tristram Cathedral. Shortly before the player leaves the Hold, they may stumble upon a scene featuring Leoric standing by as Asylla is strapped into a guillotine and beheaded by Lazarus. Watch the whole scene and a page from Lazarus's Grimoire will drop.

Queen Asylla is in some way involved in the following achievement(s).