Were you looking for the Sanctuary rune word from Diablo II? 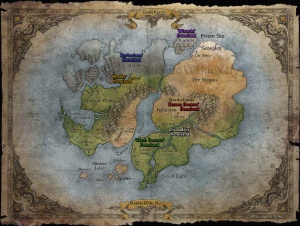 The World Map of Sanctuary.
Sanctuary is the name of the physical realm of man in the Diablo Universe. It is not the only realm, but it is the world in which the Diablo games take place.

Sanctuary was created as a plane of existence for the Nephalem, a race of omni-powerful beings birthed from renegade angels and demons who were tired of the war. The powerful demoness Lilith and the Archangel Inarius were the prime powers behind this, and their offspring were called Nephalem.

The Nephalem could basically bend reality to their whims, significantly more powerful than demons or angels themselves.

When the High Heavens and the Angiris Council found out about Sanctuary, they felt it was an abomination and designated Tyrael to take the Heavenly Host and destroy the entire world. The selfless sacrifice of Uldyssian to save Sanctuary changed Tyrael's mind, and in the end his was the weighing vote to leave Sanctuary unharmed.

He was the last to vote and while both Auriel & Itherael voted for its existence and only Imperius had voted for destruction, had Tyrael voted with Imperius, it's most likely the world would have been destroyed on Imperius' insistence.

The council wiped the memories of all humans, and none now know that Tyrael could have been the one responsible for the undoing of all of humanity.

After the existence of Sanctuary was secured, Tyrael was ordered by his fellow angels on many occasions not to interfere with the mortal world. He has often disobeyed, fearing that Sanctuary would otherwise fall into the hands of the Burning Hells.

When the Prime Evils were banished from hell during the Dark Exile, Tyrael helped humanity to create the Horadrim and the Soulstones they used to imprison Diablo, Mephisto and Baal, centuries before the events covered in Diablo I and Diablo II.

For details on all places within Sanctuary, check out the Sanctuary category:

You can also see the navigation at the bottom of this page for an easy pick.

Sanctuary is located on the Physical plane of the fabric of reality, and intermingling with this is the Etheral plane, as some explain it; located "under" the plane of reality. Certain strong-willed individuals are able to harness the spiritual essence of themselves (called "Mana") and use it to channel power from the Etheral realm, creating magical effects in the physical one. Read more in the Magic article:

As most fantasy worlds, Sanctuary consists of cultures that shares different social traits. For now, the only thing that is known about these is that there is a mutual understanding of languages between the continents, and whether this is due to the fact that people speak multiple languages through their culture, of if there is a "common" language (English) that everyone shares is unknown. Players as well as characters and NPCs in the world travel to either side of the globe, and can still communicate with people.

Names are more socially inspired though, and does show there must be some diversity with languages in the lands. Country names such as "Westmarch", and town names such as "Tristram", has a clear "Western" reference from our world, as does the architecture. Deckard Cain is a character name from a person of the west, while "Abd al-Hazir" is the name of a character from the flourishing East. If everyone shares a "common" language, they still seem to retain their own cultural names.

The only known specifically mentioned language is the Umbaru people's tongue from the Teganze area of the Torajan jungles [1].

This is of course a lot more complex than just saying they speak one of our real world languages, and "inspiration" is the best word here. Blizzard were inspired by these real world languages when they created names or words in the fantasy languages of Sanctuary. Some names have a related meaning, some sound like the related language, and some are completely unrelated:

This is a list of known date names and numbers from the Sanctuary Calendar (really the Kehjistani calendar), based on journals made by Deckard Cain and Elder Aust of Harrogath in the years 1265-1266, during the war with the Prime Evils. From Cain's notes, it looks like months are about as long as our own world's, and they obviously have both their own month names as well as week day names.

At least some of these month names were inspired by names in the real world. "Ostara" is an old Germanic name for Easter, while "Damhair" is the Scottish Gaelic name for October, the tenth month.

Worth noting is also the similarity with Nephalem names: Bul-Kathos (Kathon), Rathma (Ratham), Esu (Esunar), Vasily (Vasan). Perhaps the months, or some of them are named after the Nephalem?

These are the dates we know to exist from the journals of Cain and Aust (including archives and retconned dates):

Time of day is given by named hours. We have five examples in Aust's journal. Based on the other time clues in his journal entries, we can guess that the names used correspond to the hours of the same name on Earth, with the exception that Matins and Lauds, which are synonyms on Earth, appear to be different in Sanctuary:

There may be other named hours in the day, or times might be given in forms like "An hour past Lauds" or "Halfway from Lauds to Sext".

The names of the hours, like the general pattern of angelic names and a few other details of the world of Sanctuary, bear striking similarity to elements of Judeochristian religion on Earth but do not quite match under detailed scrutiny.

Worth noting is that these two sources would be more or less compatible if it were not for the fact that Aust is talking about events in 1265 and Deckard Cain talks about 1266. As Deckard Cain's Journal is more recently released from Blizzard, it's probably safe to say that this is the canon lore.

Mind the fact Blizzard has said there are discrepancies, and the latest stuff is the material we should believe.

The only reoccurring event known at this time about sanctuary is the mysterious Night of Souls.