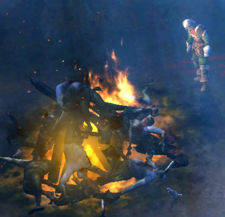 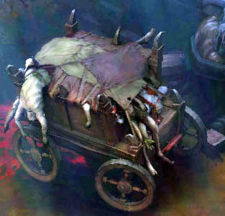 This unnamed NPC was seen in the small, merchant-free town where players began play in the Blizzcon 2008 demo. He had no dialogue and wasn't involved in the quests, but his actions were distinctive enough to make him quite memorable. All the time players were speaking to Captain Rumford, this other guy was walking back and forth between a wagon heaped high with corpses and a blazing bonfire that was functioning as a pyre for the dead. Each time he left the wagon he had a fresh, blood-dripping, gruesome corpse over his shoulder, which he proceeded to dump behind the fire.

The bodies he produced came from behind the wagon, out of sight of the player, and when he threw them down on the other bodies on the fire they landed in the rear, again our of sight. So no, you don’t actually see the pile of corpses in the wagon decrease, nor the pile on the fire grow. But it was a great piece of art work, and it did much to set the appropriately creepy, doom and gloom mood of New Tristram.