This page covers Tristram as it is seen in Diablo III as well as its history up to this point. See also:

Tristram is a shell of its former self, with some burned down buildings still not removed. A "New Tristram" built by the adventurers who sought the treasures of the Cathedral grew nearby The Old Ruins of Tristram from the days of Diablo II. New Tristram is the starting area for all classes in Diablo III.

The wilderness surrounding New Tristram (referred to by most as just Tristram) is beautiful with lush fields and picturesque rivers. It's located fairly close to the fishing village called Wortham 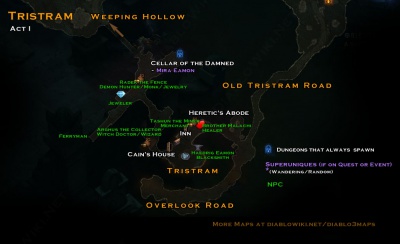 The history of Tristram starts several hundred years prior to recent events (that take place around 1260-1290 Anno Kehjistani). In the last century of the first millennium, 912 to be precise, the Sin War ended when Diablo was finally captured in a Soulstone by a group of Horadrim monks led by Jered Cain. The monks buried the Soulstone in a cave near the river Talsande in Khanduras and a Horadric monastery with a network of catacombs was built over the location.

A few years after the erection of the monastery, the town of Tristram was founded around it and people prospered with the Prime Evils out of the picture. Unfortunately, with no quests left to undertake, the Horadrim's numbers slowly dwindled, and 200 years later, they are legends that are forgotten by most, the monastery long since abandoned.

Although villages grew and thrived around the shell of the old Monastery, no one knew of the dark, secret passageways that stretched into the cold earth beneath it. None could have dreamed of the burning red gem that pulsed within the labyrinth's heart....

It was at this time that the Eastern lord Leoric came to Tristram and declared himself king, and converting the old, long-unused Horadric monastery to a Zakarum cathedral. He was betrayed by his advisor, Archbishop Lazarus, who secretly released Diablo deep within the monastery catacombs.

Diablo knew Leoric was a strong man and attempted to possess him. King Leoric was indeed strong and managed to resist, but was driven mad instead, imprisoning and executing anyone who questioned his authority. He also started a war against Westmarch, despite common sense, as the armies of Khanduras were easily outnumbered.

Failing to possess Leoric, Diablo turns to Prince Albrecht instead, kidnapping him and possessing his soul and body.

When Lachdanan, captain of King Leoric's army, returned, Leoric had gone even more mad by the loss of his only son and Lachdanan had no choice but to kill his king. The fallen monarch cursed Lachdanan and his followers with his dying breath. Not long afterwards, Lachdanan and the king's guards were attacked by Leoric, resurrected as the Skeleton King, as they attempted to bury him. 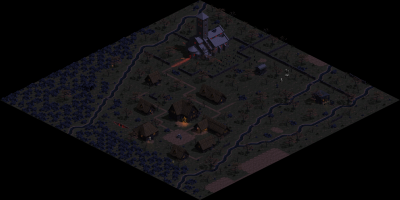 Diablo I layout of Tristram, with Hell reached.

Many adventurers disappeared down into the catacombs in search for treasure, glory or both.

Archbishop Lazarus then lead a group of villagers into the cathedral and abandoned them to a bloodthirsty butcher demon. From this point, people began fleeing Tristram in droves. If they had not left during the king's madness, they left now.

Only a small number of villagers stayed and saw a lone hero arrive and defeat the fetid butcher demon. This hero was the one Deckard Cain befriended, and with his guidance, he ventured further down into the maze and defeated the Skeleton King as well as killing Lazarus.

The hero traversed all the way into the Hell and defeated Diablo.

Unfortunately for the hero, as well as everyone else, the hero foolishly thinks he can contain Diablo within himself, and sinks the Soulstone within his own flesh. 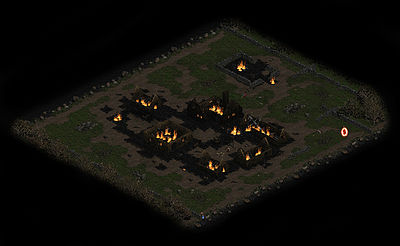 Despite his noble intentions, his valiant spirit quickly succumbed to Diablo's corruption and he became the Dark Wanderer. He left Tristram behind shortly before legions of foul demons attacked and destroyed the town and its inhabitants: Killing some, raising them as skeletons, or possessing them, making them as demons, like poor Griswold.

A group of heroes began a quest to defeat Diablo and his brothers, visiting Tristram to save the only surviving soul from the town: Deckard Cain, a descendant of the Horadrim mage Jered Cain.

Cain blamed himself that he did not foresee this, and travelled East with the heroes to save Sanctuary.

After the town was burned to the ground (The Old Ruins), "New Tristram" grew around the ancient monastery. The new town has been around for several years, but the exact date of its founding is unclear.

What happened here is now, as with most of the Diablo Legend, something dismissed out of hand by most citizens of the world. People think of the undead monstrosities, demonic possession and the monarchy driven to lunacy to be part of a peculiar mold upon the bread or perhaps a fouling of the water. It was just an unfortunate event that people went mad.

Deckard Cain has returned to Tristram, looking for clues on what the demons and angels are up to. Leah is also now in Tristram, helping Cain, and worried for his well being.

A meteor has been seen darting across the skies, crashing straight down into the Cathedral, but seemingly without hurting either Leah or Cain. The latter ventured down the hole to try and find more magical tomes to explain the events, later rescued by the Barbarian character.

Exactly what this meteor is, no one knows. If it's just some sort of cosmic stone or an angel like Tyrael or even a demon is still a mystery.